“Sentimental Ballad” by Grant Wood, depicts a group of singing men in a bar and represents a scene from a firm created in 1940 called  “The Long Voyage Home,” directed by John Ford.

The painting was commissioned by the film producer for the marketing of a film.  Nine popular artists were commissioned, and the artists were invited to visit the set of the film for several weeks to paint a motif from the upcoming film.

To create this highly detailed work, Wood painted from photographs and film stills. While he changed the composition slightly from the actual scene, his low vantage point reproduces the movie audience’s view.

The table edge is drawn at eye level, and the actors tower over the scene. The seven tipsy sailors are shown teary-eyed while singing a familiar song in a pub.

Wood acknowledged this painting as his:

“most ambitious painting he ever attempted.”

“The Long Voyage Home” is a 1940 American drama film directed by John Ford and stars John Wayne. The film tells the story of the crew from a British tramp steamer and their long voyage home.

Ford set the story for the motion picture during the early days of World War II. The crew is depicted as a motley, fun-loving, hard-drinking lot exposed to miss-adventures.

The film failed to appeal to the general public but was well received by the critics. 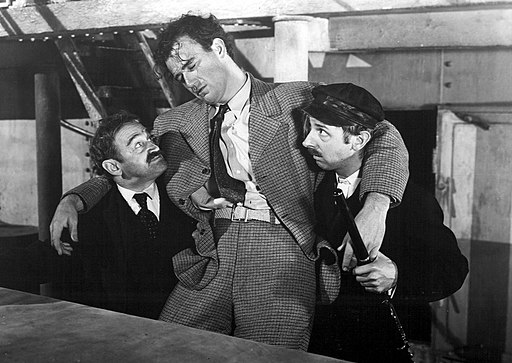 “I had to go to France to appreciate Iowa.”
– Grant Wood