“Farm Garden with Sunflowers” by Gustav Klimt depicts a garden scene with a variety of flowers and sunflowers in a garden on a farm. Gustav Klimt was a Symbolist painter and one of the most prominent members of the Vienna Art Nouveau movement.

Beginning in the late 1890s, Klimt took annual summer holidays on the shores of Attersee and painted many of his landscapes there. These landscapes constitute the only genre aside from portrait painting that seriously interested Klimt.

In recognition of his interest in natural scenes, the locals called him Waldschrat (“forest demon”).

Klimt’s Landscapes paintings are of significant quality to merit appreciation. Formally, the landscapes are characterized by the same refinement of design and unique patterning as the figural pieces.

Space in his landscape works is flattened so efficiently that it is believed that Klimt used a telescope to paint to a single plane.

In “Farm Garden With Sunflowers,” Klimt presents an arrangement of brightly colored flowers in a bush background. Bushes of yellow sunflowers dominate the top of the painting.

White hydrangeas with soft red-toned centers feature at the center of the composition. Colorful carnations in shades of red, blue, and purple add to the color composition.

Gustav Klimt created most of his landscapes while on his summer holidays. Klimt’s landscapes became increasingly abstract, and what Klimt observed served only as a stimulus.

The focus of the painting was the pictorial structure itself. Unlike the Impressionists, Klimt was not interested in atmospheric variations. His ornamental approach covers and supplants the landscape leaving little open space on the canvas.

A Tour of Gustav Klimt – Landscapes

“Avenue in the Park of Schloss Kammer” by Gustav Klimt 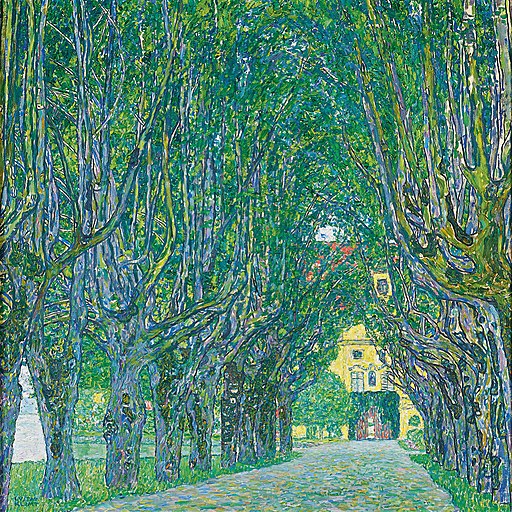 “Avenue in the Park of Schloss Kammer” by Gustav Klimt depicts Kammer Castle and its surroundings. This painting depicts the avenue leading to the castle, which is one of his famous Attersee paintings.

Attersee, also known as Kammersee, is the largest lake of the Salzkammergut region in the Austrian state of Upper Austria.

Avenue in the Park of Schloss Kammer 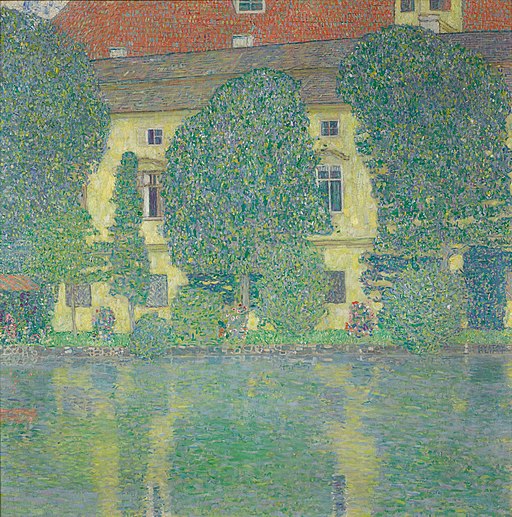 Schloss Kammer am Attersee III by Gustav Klimt depicts Kammer Castle, seen from the waterfront. The Castle, which originally dates from the 13th century, was converted into a three-story lake castle between 1622 and 1649.

The new castle included a knight’s hall, and later, two low side wings were added, which provided with arcades on the ground floor. The gate construction also dates from this period.

In the castle, there is an 18th-century chapel decorated with stucco and dedicated to the Virgin Mary. A  staircase was added in 1748, which leads to the ballroom. The castle is privately owned and can only be visited for official events.

“Beech Grove I” by Gustav Klimt 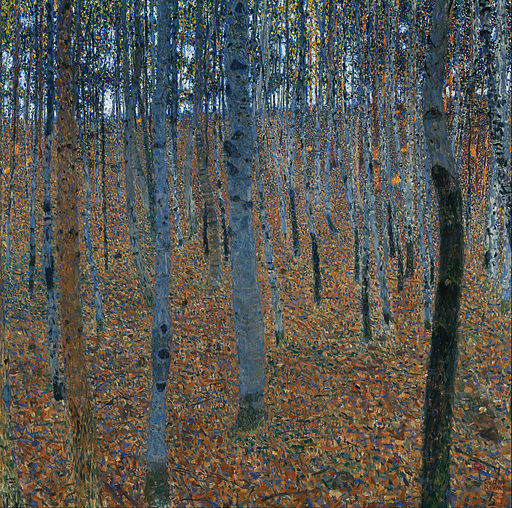 Beech Grove I” by Gustav Klimt depicts the smooth and light grey bark of the European beech tree. As a naturally growing forest tree, it marks an important border between the European deciduous forest zone and the northern pine forest zone.

Beechwood is an excellent firewood, but also used in the bottom of fermentation tanks for the production of beer. Beechwood provides a complex surface on which the yeast can settle.

Beech logs are burned to dry the malt used in some German smoked beers, giving the beers their typical flavor. Beech is also used to smoke ham, sausages, and some cheeses.

In antiquity, the barks of the beech trees were used for writing-related purposes. Beechwood tablets were a common writing material in Germanic societies before the development of paper.

The Old Norse bók has the primary sense of “beech” but also a secondary sense of “book,” and it is from bōc that the modern word derives. In modern German, the word for “book” is Buch, with Buche meaning “beech tree.”

In modern Dutch, the word for “book” is boek, with beuk meaning “beech tree.” In Swedish, these words are the same, bok meaning both “beech tree” and “book.”

“Oberösterreichisches Bauernhaus” by Gustav Klimt depicts a farmhouse in Buchberg as if the viewer is inside a forest, looking through a clearing. Klimt used French pointillism extensively for his landscape depictions.

In contrast to the French, Klimt did not open up all motifs in a uniform network of dots of color but instead emphasized distinctive motifs such as tree trunks or fruits with this technique.

Klimt hardly used the pointillist technique for portrayals or symbolistic pictures, but mainly for landscapes. In this painting, Klimt avoided open spaces and shadows to create the impression of two-dimensional surface patterns.

“Rosebushes under the Trees” by Gustav Klimt

“Rosebushes under the Trees” by Gustav Klimt was created during the artist’s summer holidays of 1904 and 1905 when he stayed in Litzlberg.

The canvas is covered with dabs of color and small brush strokes in the style of a mosaic. The tree foliage, above a narrow band of grass meadow, forms the main part of the composition.

The title of the painting derives from the rose bushes in the foreground under the trees.

Klimt created a composition of small dabs of paint, ranging from light to dark green, with contrasting tones of pink, mauve, and yellow.

The color flecks dissolve the landscape elements into the rudimentary tree trunks, which identify an orchard. The sky is visible, only tiny gaps as the top corners.

Rosebushes under the Trees

“The House of Guardaboschi” by Gustav Klimt

“The House of Guardaboschi” by Gustav Klimt echos his early artistic career, as a successful painter of architectural decorations in a conventional manner.

Beginning in the late 1890s, he took annual summer holidays on the shores of Attersee and painted many of his landscapes there.

Gustav Klimt (1862-1918) was a symbolist painter and one of the most prominent members of the Vienna Secession movement.

Klimt’s primary subject was the female body, and eroticism marks his works.

Klimt was influenced by Japanese art and its methods and achieved success with the paintings of his “golden phase,” many of which include gold leaf. “The Kiss” is Klimt’s most famous painting.

Klimt died in 1918, having suffered a stroke and pneumonia due to the worldwide influenza epidemic of that year. Numerous paintings by him were left unfinished.

The Meditative Beauty of Klimt’s ‘Bauerngarten’