Henri Rousseau (1844 – 1910) was a French post-impressionist who painted in the Naïve or Primitive manner. He started painting seriously in his early forties; by age 49, he retired from his job to work on his art full-time.

“Tropical Landscape: American Indian Struggling with a Gorilla” by Henri Rousseau is a dreamlike scene where imagination dictated the compositions rather than traditional forms of perspective and scale.

Rousseau studied exotic plants and animals in Paris’s botanical gardens and zoos, as he had never traveled outside of France.

Henri Rousseau was inspired by the romantic views of the American West promoted by magazine images of Native Americans and American Wild West Show that toured France. 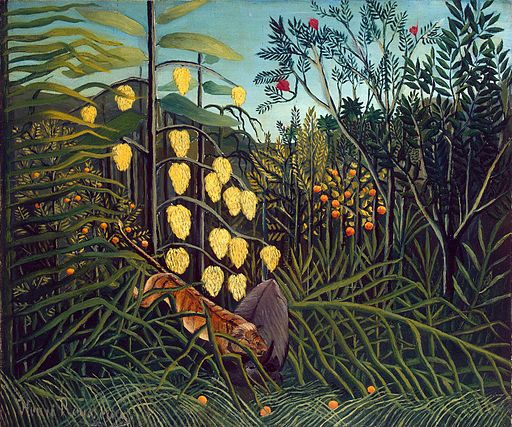 “Struggle between Tiger and Bull” by Henri Rousseau depicts an idealized “primitive” fantasy of a tiger attacking a bull in a jungle setting.

This painting is similar to Rousseau’s other artworks depicting animals amongst foliage inspired by the artist’s study of Paris’ botanical gardens and the many jungle pictures he collected.

Despite its apparent simplicity, Rousseau’s jungle painting was built up meticulously in layers, using a large number of green shades to capture the lush abundance of the jungle.

“The Equatorial Jungle” by Henri Rousseau was ridiculed during much of his life as a naïve painting. Rousseau’s technique included the use of controlled brush strokes, which made each object in the painting appear outlined.

Eventually, with the endorsement of Picasso, Matisse, and other artists, Rousseau gained the recognition he craved. Today he is known a self-taught genius famous for his imaginary jungle scenes.

Primitivism is a mode of aesthetic idealization that aspires to recreate the “primitive” experience.

Henri Rousseau created several paintings of the jungle scenes that can be classed as Primitivism Art while working in a style that is also called Naïve Art.

Naïve Art is created by an artist who lacks formal education and training in art history, technique, and perspective. 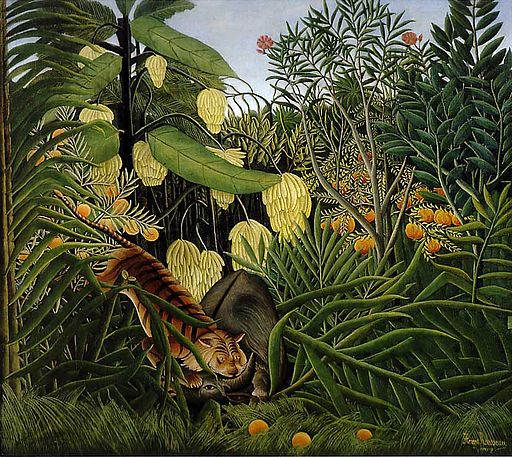 Rousseau’s imaginative visions and the technique of painting was unique. He applied one layer at a time, creating multiple layers, and he carefully blended his brushstrokes to create a smooth surface.

Henri Rousseau’s inspiration came from illustrations in children’s books and botanical gardens as well as tableaux of wild taxidermy animals in Paris’s museums of Natural History.

Henri Rousseau frequently visited the Jardin des Plantes for inspiration. he is quoted as saying:

“When I go into the glasshouses, and I see the strange plants of exotic lands, it seems to me that I enter into a dream.”

Three hectares are devoted to horticultural displays of decorative plants. An Alpine garden has species with worldwide representation.

Specialized buildings, such as the winter garden, and Mexican and Australian hothouses display regional plants, not native to France.

“The Snake Charmer” by Henri Rousseau depicts a woman with glowing eyes playing the flute in the moonlight by the edge of a dark jungle with a snake extending toward her from a nearby tree. The Musée d’Orsay described the painting as:

“a black Eve in a disquieting Garden of Eden.”

Henri Rousseau created a detailed depiction of the jungle back-lit by moonlight from a full moon. The snake, charmed by the music, stretches across the painting.

The Snake Charmer was Rousseau’s first significant commission and was exhibited in the 1907 Autumn Salon.

Rousseau had never traveled outside of France, but the exotic plants in the painting resulted from Rousseau’s visits to the Jardin des Plantes and magazines.

From 1922 to 1936, The Snake Charmer was in the collection of Jacques Doucet. 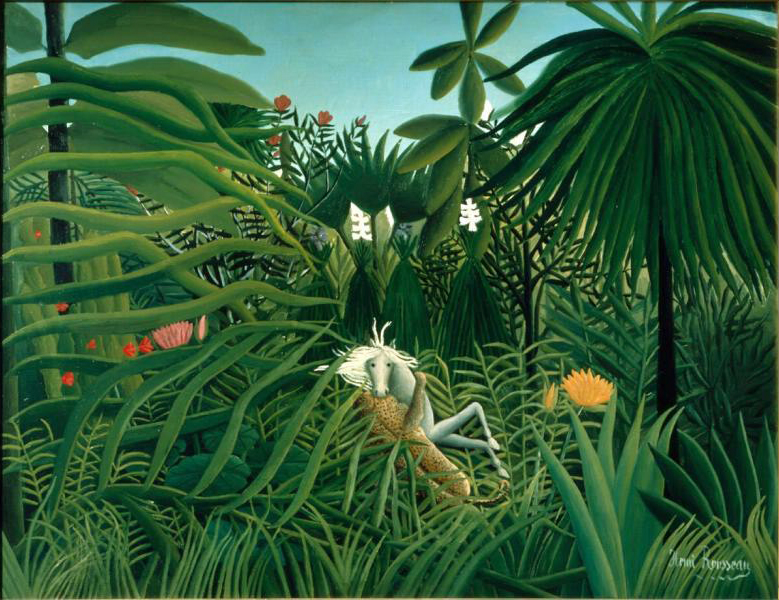 “Horse Attacked by a Jaguar” by Henri Rousseau is jungle paintings depicting a Jaguar attacking a white horse painted with meticulous care. The horse stares transfixed in a strange contrast of white against lush green.

Rousseau’s fantastic scenes heralded Surrealism and were built up meticulously in layers, using a large number of green shades to capture the lush abundance of the jungle.

Rousseau’s work continued to be derided by the critics even after his death in 1910. Eventually, Henri Rousseau won a following among Picasso, Matisse, and Toulouse-Lautrec, who all became admirers of his work.

Primitivism in Art is an aesthetic idealization that aspires to recreate “primitive” experience. In Western Art, primitivism typically has borrowed from non-Western cultures perceived to be “primitive,” such as Paul Gauguin’s inclusion of Tahitian motifs in paintings and ceramics.

Borrowings from non-Western Art has been important to the development of Modern Art. Primitivism has also been critiqued for reproducing racist stereotypes.

The desire to be restored to a “state of nature” is as longstanding as civilization itself. In antiquity, the superiority of “primitive” life found expression in the so-called Myth of the Golden Age, depicted as the Pastoral.

Primitivism then gained new impetus with the European encounter of unknown peoples of the Americas, the Pacific, and Africa.

In the 19th century, global transportation brought the indigenous cultures of the European colonies and their artifacts into metropolitan centers.

Western-trained artists were fascinated by these objects, attributing their features and styles to “primitive” forms of expression.

These stylistic attributes, present in the visual arts of Africa, Oceania, and the Indians of the Americas, could also be found in the archaic and peasant Art of Europe and Asia, as well.

Naïve Art is visual Art created by a person who lacks the formal training that a professional artist undergoes. When a trained artist emulates this aesthetic, the result is sometimes called primitivism or pseudo-naïve Art.

Naïve artists are aware of “fine art” conventions but are not skilled to use them or choose not to.

Naïve Art is recognized, and often imitated, for its simplicity and frankness. Paintings of this kind typically have a flat rendering with a rudimentary expression of perspective. Henri Rousseau was a particularly influential painter of “naïve art.”

The term Naïve Art is used for the forms of Fine Art, such as paintings and sculptures, but made by a self-taught artist, while objects with a practical use come under folk art.

Many critics who ridiculed his work disparaged Rousseau’s style. However, he always aspired, in vain, to common acceptance. Many observers commented that he painted like a child, but the work shows sophistication with his unique style and technique.

Why Is This Woman in the Jungle?