“Harmony in Pink and Grey” by James Abbott McNeill Whistler

Harmony in Pink and Grey by James Abbott McNeill Whistler is one of several full-length Portraits of Lady Meux by Whistler.

Lady Meux was a friend and patron of Whister’s. A woman of humble origins before marrying Sir Henry Meux, the heir to a brewery fortune.

She was an outsider to conservative British society. Still, Lady Meux joined forces with the equally controversial artist Whistler to promote her image in the three full-length portraits Whistler made of her.

Whistler painted this second portrait depicting the subject on stage before a pinkish-grey curtain, in an obvious allusion to her very brief stage career.

Lady Meux claims her space in front of a curtain and looks out at us with a challenging stare. She wears a high fashion light grey dress trimmed in pink satin and a sleek molded bodice.

Whistler painted her cascading chiffon train trimmed in satin with a bravado that expresses his subject’s energy.

The butterfly emblem that Whistler used as a signature is on the right side of the painting, below the middle.

Whistler assigned many of his paintings’ titles with terms like “arrangement” and “harmony,” which may be interpreted as either musical or abstract.

Harmony in Pink and Grey (Portrait of Lady Meux)

“Arrangement in Black, No. 5” by James Abbott McNeill Whistler 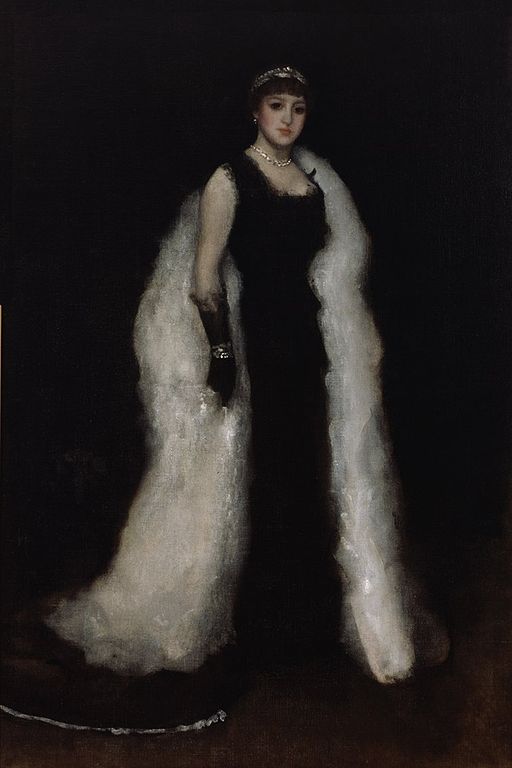 “Arrangement in Black, No. 5” by James Abbott McNeill Whistler

“Arrangement in Black, No. 5” by James Abbott McNeill Whistler was his first significant commission after his bankruptcy. Whistler had become bankrupt in 1879, following his lawsuit against the critic John Ruskin.

The painting was commended by Edward VII of the United Kingdom (then Prince of Wales) and Princess Alexandra when they saw it in the artist’s studio.

The painting was also exhibited in the 1882 Paris Salon, where it was enthusiastically received.

The title suggests music and points to Whistler’s emphasis on an arrangement of line, form, and color. Yet both of these portraits of Lady Meux evoke the personality of the sitter.

A third painting known as Portrait of Lady Meux in Furs was also commenced in 1881. Whistler destroyed this canvas after becoming outraged over a comment made to him by Lady Meux during a sitting.

Both this painting and the destroyed painting belong to a series of “black portraits,” paintings Whistler executed at various stages of his career in a palette dominated by black.

Arrangement in Black, No. 5(Portrait of Lady Meux)

She was never accepted by her husband’s family or by high society. She met her future husband at the Casino de Venise in Holborn, where she worked as a banjo-playing barmaid.

Lady Meux was a colorful and controversial figure. She drove herself around London in an open carriage, drawn by a pair of zebras. Her house was lavishly enlarged with a swimming pool and an indoor roller skating rink.

In 1887, at Lady Meux’s request, the dismantled Temple Bar, the ceremonial entrance to the City of London, was purchased from the City of London Corporation, transported to her property, and rebuilt as a new gateway to the estate.

During the Second Boer War, she ordered, at her own expense, six naval 12-pounders on special field carriages that were sent to South Africa to support the British troops.

When Sir Hedworth Lambton, the Naval Brigade commander at Ladysmith, returned to England, he called on Lady Meux to thank her for her gift and recount his adventures.

She was so taken with him that she made him the chief beneficiary of her will, on condition that he change his surname to Meux. When she died, he changed his name and inherited her estate and substantial interest in the Meux Brewery.

Whistler painted three portraits of Lady Meux in 1881. The paintings were the first full-scale commissions given to Whistler following the notorious Ruskin trial, which had left him financially bankrupt.

A Tour of the Frick Collection

Whistler’s “Harmony in Pink and Grey”

A Virtual Tour of the Honolulu Museum of Art