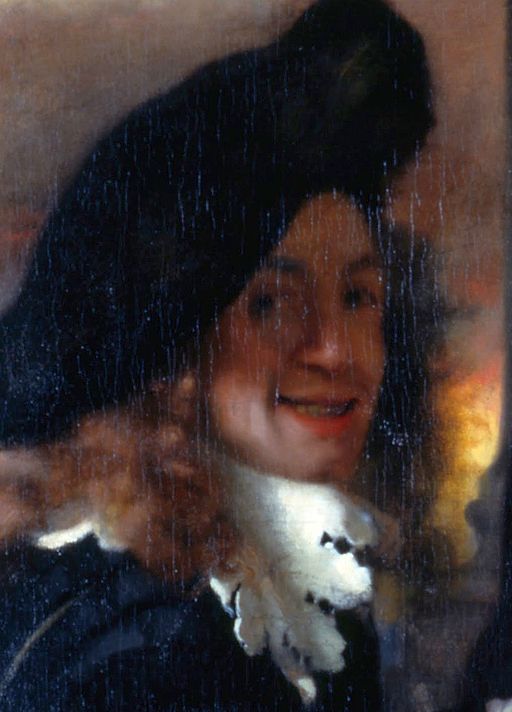 A Virtual Tour of Johannes Vermeer

Vermeer produced only two to three paintings a year, and only 35 known works exist today. The slow rate at which he produced paintings restricted Vermeer from becoming wealthy during his lifetime, and he died in debt.

Vermeer is thought to have used a camera obscura, which may have influenced the way he often painted highlights.

Johannes Vermeer was a moderately successful painter in his lifetime. However, he was not wealthy, leaving his wife and children in debt at his death.

Vermeer’s paintings have been challenging to date with accuracy. Vermeer painted mostly domestic interior scenes, and most of his pictures are set in the rooms of his house in Delft.

Vermeer died at a relatively young age, 43, in 1675. He suffered most likely from a stroke or heart attack.

Girl with a Pearl Earring

“Girl with a Pearl Earring” by Johannes Vermeer portrays a girl wearing an exotic dress, an Eastern turban, and an improbably large pearl earring.

The work is signed “IVMeer” and is one of Vermeer’s most famous paintings, but very little is known about the background story to this picture, plus the identity of the girl is also a mystery. Museum: Mauritshuis

“The Concert” by Johannes Vermeer depicts a man and two women playing music and singing. The young woman is sitting at a harpsichord, and the man is playing the lute, and a woman standing while singing.

The harpsichord’s upturned lid is decorated with a landscape. A viola da gamba can be seen lying on the floor.

Lady at the Virginal with a Gentleman

Their relationship is no precise or clear from this painting. The composition uses perspective to draw the eye towards the back of the room where the figures are in front of the virginal.

The virginal is a keyboard instrument of the harpsichord family and was popular in Europe during the late Renaissance and early Baroque period. Museum: Queen’s Gallery, Buckingham Palace

Woman with a Pearl Necklace

“Woman with a Pearl Necklace” by Johannes Vermeer portrays a young Dutch woman, dressing with yellow ribbons, pearl earrings, and a pearl necklace.

Vermeer depicted many women in similar circumstances in interior domestic scenes. The same woman also appears in The Love Letter and A Lady Writing a Letter. Museum: Gemäldegalerie, Berlin

“The Milkmaid” by Johannes Vermeer depicts a domestic kitchen maid, an indoor servant, and not a milkmaid who milks the cow.

She is carefully pouring milk into an earthenware container, now commonly known as a “Dutch oven.” She is a young woman wearing a linen cap, a blue apron, and work sleeves pushed up from the forearms.

Various art commentators have pointed to the possibility of symbols in the painting that suggest amorous references, while others argue to the contrary and that the maid is treated in an empathetic and dignified way. Museum: Rijksmuseum, Amsterdam

View of Houses in Delft, known as ‘The Little Street’ by Johannes Vermeer, depicts a quiet street, with four people conduction routine tasks in everyday life in a Dutch town.

It is one of only three Vermeer paintings of Delft’s views, and it captures a perspective that Vermeer knew well.

The house on the right in this painting belonged to Vermeer’s aunt, and Vermeer’s mother and sister also lived on the same canal, diagonally opposite. Museum: Rijksmuseum, Amsterdam

The Allegory of Faith

“The Allegory of Faith” by Johannes Vermeer was painted about 1670 and depicts a woman in an elegant white and blue satin dress with gold trimmings.

She is surrounded by iconography related to faith. She sits on a platform a step higher than the marble floor, her right foot on a terrestrial globe and her right hand on her heart as she looks up, adoringly, at a glass sphere hung from the ceiling by a blue ribbon.

Vermeer’s iconography in the painting is mostly taken from an academic book of allegorical illustrations with accompanying morals, translated into Dutch in 1644. Museum: Metropolitan Museum of Art – M.E.T.

Their relationship is no precise or clear from this painting. The composition uses perspective to draw the eye towards the back of the room where the figures are in front of the virginal.

“The Lacemaker” by Johannes Vermeer shows a young woman dressed in a yellow shawl, holding up a pair of bobbins in her left hand as she carefully places a pin in the pillow on which she is making her bobbin lace.

The girl is set against a blank wall to eliminate any distractions from the image of concentration and focus. The techniques of lacemaking are portrayed in detail and accurately.

Vermeer may have used a camera obscura while composing the work. Many of the optical effects typical of photography can be seen, particularly the blurring of the foreground.

By rendering areas of the canvas as out-of-focus, Vermeer can suggest a depth of field in a manner unusual of Dutch Baroque painting of the era. Museum: Louvre

“The Geographer” by Johannes Vermeer is dressed in a Japanese-style robe, which was popular with scholars.

The geographer has measured distances on a map, and now he has paused for thought. Museum:  Städel Museum

Girl Reading a Letter at an Open Window

A tasseled ochre drapery in the foreground right, partially closed, covers part of the room in which she stands.

Fruit in a tilted bowl, on the luxurious carpet that drapes the table, and the light from the window highlights the peach cut in half. Museum: Gemäldegalerie Alte Meister

A Young Woman standing at a Virginal

“A Young Woman standing at a Virginal” by Johannes Vermeer depicts a richly dressed woman playing the virginal.

A virginal was a keyboard instrument of the harpsichord family, popular in Europe during the late Renaissance to the 1700s.

The setting for this composition is a home with a tiled floor, paintings on the wall, and some of the locally manufactured Delftware blue and white tiles of a type that appears in other Vermeer works. Museum:    National Gallery, London

A Lady Writing a Letter

“A Lady Writing a Letter” by Johannes Vermeer depicts a lady writing a letter while sitting at a table in a room. She appears to have been interrupted as she looks up towards the viewer while holding the quill in her right hand.

The lady is dressed in an elegant lemon-yellow morning jacket and wears pearl earrings. A necklace lies on the table.

Vermeer’s compositional focus is on the woman and her face. The smaller objects on the table stand in contrast with the large forms used in the rest of the composition, which create a geometric framework for the figure.

On the back of the wall is a dark painting that covers much of the background and contrast with the lady’s brighter colors.

Johannes Vermeer: A collection of paintings

The man to the side wearing a black beret and a doublet with slashed sleeves is probably a Vermeer’s self-portrait. In the painting, Vermeer’s character is a musician, in the employ of the madam, he carries a cittern as his musical instrument.

“Officer and Laughing Girl” by Johannes Vermeer depicts a girl in a yellow dress seated at a table facing a man with a large hat. She has a soft light falling on her face, coming from the left-hand side of the painting from an open window.

The man in the painting has his back to the viewer and is mainly in the shadows with his face obscured. He is a cavalier wearing a red coat and an expensive hat, showing his wealth and rank. His hat is wide-brimmed, which was weather-resistant and used for snowy and rainy conditions.

The background includes a large map on the wall. The window and lighting are characteristic of Vermeer’s interior paintings because he used the same room in many of his paintings.

This window is extremely similar to the window in the Girl Reading a Letter and Open Window and the Milkmaid. The glass in the window has variations of color, showing Vermeer’s precision in this painting’s details.

The woman resembles Vermeer’s wife, Catharina Bolnes, who had posed for many of his paintings. With x-ray photographs, art historians can see that Vermeer had initially planned to paint the woman with a large white collar.

This was later changed to show more of her yellow dress. The yellow bodice with braiding has appeared in many of Vermeer’s other portraits. The woman is showing holding a wine glass, usually used for white wine to illustrate her wealth. Museum:  Frick Collection

“Mistress and Maid” by Johannes Vermeer depicts two women, in which the maid interrupts to deliver a letter to the seated woman who was writing a letter. The painting exemplifies Vermeer’s preference for yellow and blue, female models, and domestic scenes.

Vermeer made strong use of yellow in the woman’s elegant fur-lined overcoat and blue in the silk tablecloth and the maid’s apron. The painting focuses on the Mistress sitting at a desk writing, and the Maid as she delivers a message.

The light in the painting comes from the left and falls on the mistress’s face. The mistress has a pensive gaze, with her fingertips lifted to her chin in a questioning manner.

Vermeer favored the portrayal of quiet domestic scenes containing women. For Vermeer, this composition focuses on a moment of interaction and interruption that suggests drama and mystery.

The gestures and expressions of the two women in this painting suggest anxiety over the letter and contents. Museum:  Frick Collection

Questions about Vermeer and his Art

“The purpose of art is washing the dust of daily life off our souls.”
– Pablo Picasso