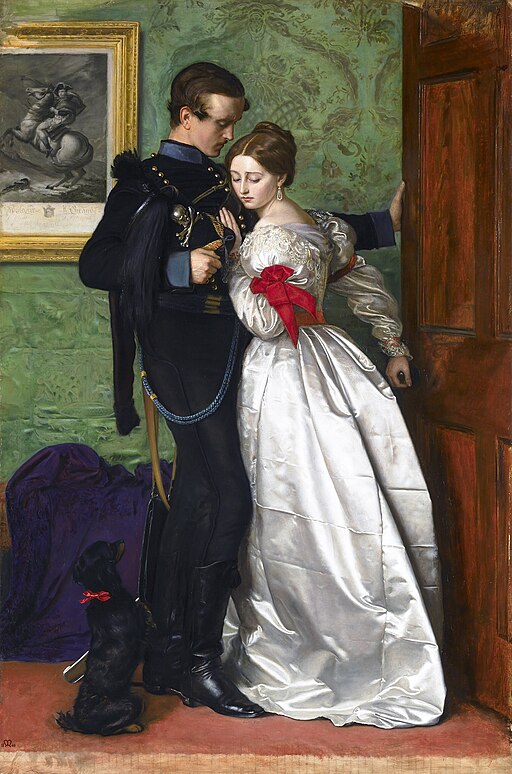 Millais depicts a Brunswicker about to depart for battle. His sweetheart, wearing a ballgown, restrains him, trying to push the door closed, while he pulls it open.

This scene was imagined to have occurred during a ball, that took place on 15 June 1815, from which the officers departed to join troops at the Battle of Quatre Bras.

The artist has expertly contrasted the officer’s black broadcloth and the lady’s pearl-white satin in a moment of tender conflict.

Millais represented the menacing presence of Napoleon in the engraving after Jacques-Louis David’s Napoleon Crossing the Alps, which is framed on the wall.

However, its presence perplexed critics and caused multiple interpretations. Did the print imply the female character was an admirer of Napoleon?

The daughter of Charles Dickens was used as a model for the woman seen in this painting. The male model was an anonymous soldier who died shortly afterward.

A Dream of the Past: Sir Isumbras at the Ford by John Everett Millais depicts an aged medieval knight helping two young peasant children over a river. The peasant children are carrying wood for winter fuel.

The title of the painting refers to the medieval poem Sir Isumbras and his good deeds. When first exhibited, the painting was extremely controversial and was attacked by many critics.

The theme of the Christian Chivalry was a topical one at the time, and Millais was also influenced by Albrecht Dürer’s print, The Knight, Death, and the Devil.

Despite its first negative reception, the painting inspired several other images of chivalric knights.

John Everett Millais (1829 –  1896) was a Victorian-era English painter who was one of the founders of the Pre-Raphaelite Brotherhood.

The Pre-Raphaelite Brotherhood was founded at his home in London.

Millais became a famous exponent of the style with this painting. By the mid-1850s, Millais was moving away from the Pre-Raphaelite style.

He had developed a new and powerful form of realism in his art.