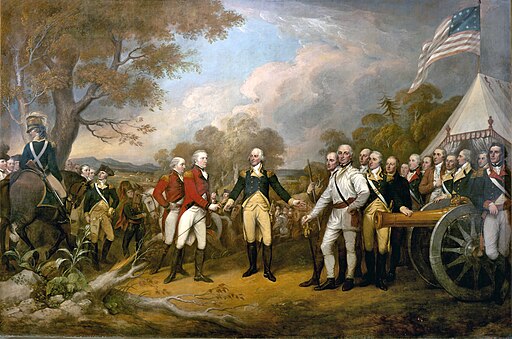 The painting was completed in 1821 and hung in the United States Capitol’s rotunda in Washington, D. C. Trumbull also created a smaller version exhibited at the Yale University Art Gallery.

The rotunda version was used as the basis for a commemorative stamp issued in 1994. 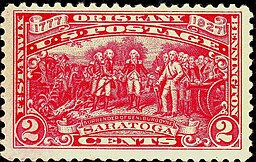 General John Burgoyne (1722 – 1792) was a British officer and politician who sat in the House of Commons from 1761 to 1792. Burgoyne is best known for his role in the American Revolutionary War.

During the war, he designed an invasion scheme and commanded a force moving south from Canada to split away New England and end the rebellion.

Burgoyne advanced from Canada, but his slow movement allowed the Americans to prepare their forces.  According to his plan, the British Army in New York City was tasked with moving north to assist. Instead, they moved south to capture Philadelphia.

Burgoyne fought two small battles near Saratoga but was surrounded and outnumbered by American forces, and, with no relief in sight, he surrendered his entire army of 6,200 men on 17 October 1777.

Burgoyne’s army surrendered with full honors of war and marched past to stack arms as the American and British bands played “Yankee Doodle” and “The British Grenadiers.”

The British government of Lord North came under sharp criticism when the news of Burgoyne’s surrender reached London. Lord North issued a proposal for peace terms in Parliament that did not include independence, but when these were delivered to Congress, they were rejected.

Burgoyne and his officers returned to England, but the enlisted British became prisoners of war. Burgoyne was criticized when he returned to London and never held another active command.

Engraving used on the reverse of the $500 National Bank Note.

His painting “Declaration of Independence” was used on the commemorative bicentennial two-dollar bill. Trumbull also incorporated the actual likeness of his subjects into his depiction of historical paintings.

The Battle of Saratoga