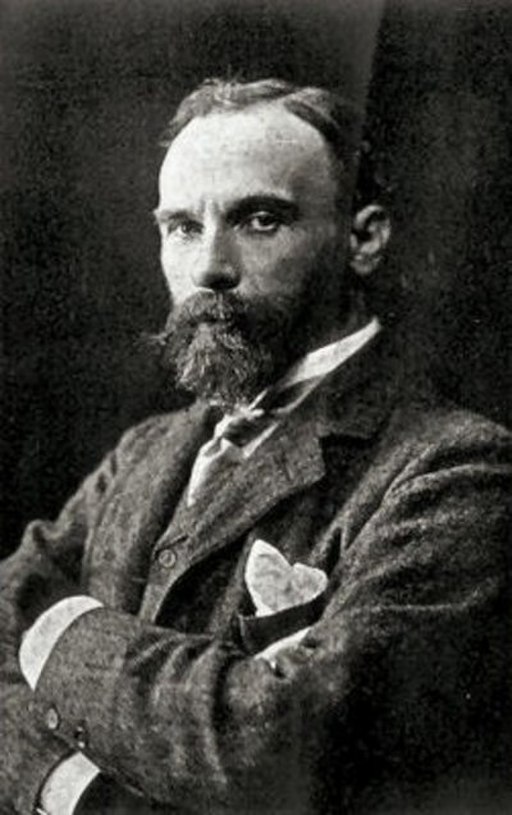 Waterhouse (1849 – 1917) worked in the Pre-Raphaelite style, several decades after the breakup of the Pre-Raphaelite Brotherhood, which included artists such as Dante Gabriel Rossetti, John Everett Millais, and William Holman Hunt.

“The Lady of Shalott” by John William Waterhouse portrays the ending of Alfred, Lord Tennyson’s 1832 poem of the same name.

The scene shows the plight of a young woman from Arthurian legend, who yearned with unrequited love for the knight Sir Lancelot but was isolated under a curse in a tower near King Arthur’s Camelot.

The Lady of Shalott was forbidden to look directly at the outside world. She was doomed to view the world through a mirror and weave what she saw into a tapestry. Her despair intensified when she saw loving couples in the far distance.

One day she saw Sir Lancelot passing on his way in the reflection of her mirror, and she was overcome with desire and dared to look out at Camelot, bringing about the curse.

The lady decided to face her destiny and escaped by boat, to sail to Camelot and her inevitable death. Museum: Tate Britain

“Hylas and the Nymphs” by John William Waterhouse portrays the abduction of Hylas by water nymphs. Hylas, according to classical mythology, was as a youth who served as Heracles’ companion and servant. Nymphs of the spring kidnaped Hylas.

The story is based on a myth from Ovid’s Metamorphoses, a Latin mythological epic. In the tale, the mountain nymph Echo falls in love with Narcissus. Narcissus, however, rejects her love.

The nymph Echo, who was so upset by his rejection that she withdrew from life and wasted away until all that was left was a whisper. Her prayers were heard by the goddess Nemesis, who caused Narcissus to fall in love with his reflection.  Museum: Walker Art Gallery

The Favorites of the Emperor Honorius

“The Favorites of the Emperor Honorius” by John William Waterhouse portrays Honorius feeding birds which are on the rug in front of him.

The colors of the Emperor’s clothes and the carpet dominate the foreground. In contrast to the councilors seeking his attention, and who, along with the attendants, are dressed in paler shades.

However, the Emperor is also shown as indecisive. His face in shadow is contrasted to Augustus’s statue in the background. Museum: Art Gallery of South Australia

“Circe Invidiosa,” which in Latin means “Jealous Circe” by John William Waterhouse, portrays Circe, poisoning the water to turn Scylla, her rival into “a hideous monster.”

Circe is a goddess of magic, or sometimes an enchantress from Greek mythology, and Scylla was a beautiful nymph who gets turned into the monster.

In Latin, Invidia is the sense of envy, a “looking upon” associated with the evil eye. Invidia or envy is one of the Seven Deadly Sins in Christian belief. Invidia is also the Roman name for the ancient Greek goddess, Nemesis.

In this painting, Waterhouse has expertly invested his main subject with an aura of menace, with deep greens and blues and the echo of straight vertical lines emphasizing the inevitability of her intent. Museum: Art Gallery of South Australia

“Diogenes” by John William Waterhouse depicts “Diogenes the Cynic” (412 – 323 BC), who was a Greek philosopher. Diogenes was a controversial figure with a reputation for sleeping and eating wherever he chose in a highly non-traditional fashion.

Diogenes made a virtue of poverty. He begged for a living and often slept in a large ceramic jar in the marketplace, as Waterhouse has depicted him in this 1882 painting.

Waterhouse has contrasted the joyful and richly dressed women with the older man who was one of the founders of Cynic philosophy. In front of his ceramic jar lodgings is a lamp that he carried during the day, claiming to be looking for an honest man.

Diogenes criticized Plato, disputed his interpretation of Socrates, and he was also noted for having mocked Alexander the Great, both in public and to his face when he visited Corinth in 336. Museum: Art Gallery of New South Wales

I Am Half-Sick of Shadows, Said the Lady of Shalott

The scene shows the plight of a young woman from Arthurian legend, who yearned for the outside world but was isolated under a curse in a tower near King Arthur’s Camelot.

The lady wears a red dress, in a small dark room with Romanesque column windows. The Lady of Shalott was forbidden to look directly at the outside world. She was doomed to view the world through a mirror and weave what she saw into a tapestry.

In this painting, Waterhouse shows the large round mirror, through which the Lady views the world. He also captures her yearning look as she sees a couple in the bottom right of the mirror. Museum: Art Gallery of Ontario

Ulysses and the Sirens

“Ulysses and the Sirens” by John William Waterhouse dramatically illustrates an episode from the journeys of the Greek hero Odysseus, who is better known as Ulysses, the Latin variant.

This painting depicts the incident in which the infamous Sirens lured unwary sailors towards perilous rocks and their doom by singing their enchanting songs.

Ulysses was curious to hear the Sirens song, and so, on the advice of Circe, he had all of his sailors plug their ears with beeswax and then allowed himself to be tied to the mast.

He ordered his men to leave him tied tightly to the mast, no matter how much he would beg. Museum: National Gallery of Victoria

“Consulting the Oracle” by John William Waterhouse depicts a group of seven young girls, sitting in a semicircle around a lamplit shrine. They are waiting in anticipation for the priestess to interpret the words of the Teraph.

The priestess motions for silence as she bends forward to catch the mysterious utterances.

The Teraph was a human head, cured with spices, which was fixed against the wall, with lamps being lit before it. A teraph was an idol or image reverenced by the ancient Hebrews and kindred peoples, apparently as a household god.

Primitive religious rites were performed in the presence of Teraph. Also, the imagination of diviners was inspired to hear a low voice predicting future events. The painting’s setting is imaginary but has exotic, middle-eastern motifs. Museum: Tate Britain

A Tale from the Decameron

“A Tale from the Decameron” by John William Waterhouse depicts a scene from Boccaccio’s Decameron. The Decameron contains a collection of 100 tales told by a group of seven young women and three young men who are sheltering in a secluded villa just outside Florence to escape the Black Death of 1348.

In Italy, during the time of the Black Death, ten young people flee from plague-ridden Florence to a deserted villa in the countryside for two weeks.

To pass the days, each member of the party tells a story, except for one day per week for chores, and the Sunday during which they do no work at all.

This combination resulted in ten nights of storytelling for two weeks. Thus, by the end of the fortnight, they have told 100 stories. Museum:          Lady Lever Art Gallery

“Circe Offering the Cup to Ulysses” by John William Waterhouse depicts a scene from Homer’s Odyssey. The painting shows the beautiful sorceress Circe offering Odysseus (called Ulysses by the Romans) a cup containing a magic potion.

Circe is shown with a  cup in one hand and a wand in the other. She is surrounded by purple flowers, the color of royalty, as she believes herself to be a queen. She sits on a golden throne, with roaring lions depicted on each arm.

Odysseus’s reflection can be seen in the mirror behind Circe’s throne. She is attempting to bring Ulysses under her spell as she already has his crew. Museum:  Gallery Oldham

This composition is one of Waterhouse’s most daring artworks. The body is dramatically foreshortened, and the snow contrasts with 12-year’s exposed flesh. Museum: Tate Britain

“Fair Rosamund” by John William Waterhouse depicts Rosamund Clifford (1150 – 1176), often called “The Fair Rosamund,” who was famed for her beauty and was a mistress of King Henry II of England. She was reputed to be Henry’s greatest love.

Henry had met her in 1166 and had begun their liaison in 1173. The king had many mistresses, but although he treated earlier liaisons discreetly, he flaunted Rosamund. He may have done so to provoke Eleanor into seeking an annulment.

The traditional story recounts that to conceal his illicit affair from Eleanor; he conducted them within the innermost recesses of a complicated maze, which he caused to be made in his park at Woodstock, Oxfordshire.

Lamia symbolizes any person or desire that seems to be attractive but is actually destructive. Beauty can be superficial and destructive. The poem concerns the tension between appearance and reality. Museum:  Auckland Art Gallery Toi o Tāmaki

The Brotherhood’s new doctrines, as defined by William Michael Rossetti, were expressed in four declarations:

“Creativity is contagious, pass it in.”
– Albert Einstein