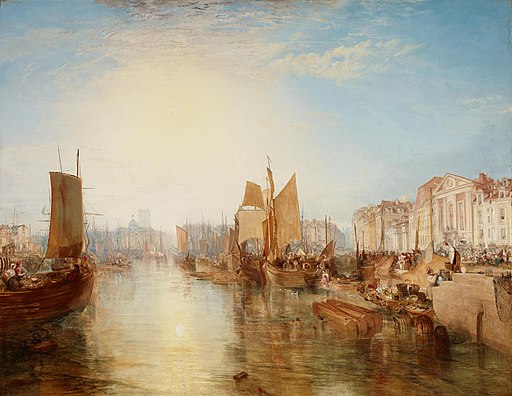 “The Harbor of Dieppe” by J.M.W. Turner

“The Harbor of Dieppe” by J.M.W. Turner shows the brilliant light that each day transformed the commercial French harbor in the early morning. The sun is depicted as a white fireball in the sky and reflected as a muted yellow in the water below.

The sun’s reflection on the water draws the viewer into the painting, as the two arms of the city, with its buildings and boats, reach around and point to the distant horizon.

Turner created this composition from the many sketches he had made on-site in earlier years, detailing the building structures along the right side of the paintings, many of which still stand today.

Long before steamships and railroads, Dieppe, as portrayed by Turner in 1826, was one of the key French ports for goods transiting to and from England.

The critics were baffled by Turner but grudgingly admitted that:

“amidst all this glitter and gaud of colors, it is impossible to shut our eyes to the wonderful skill, and to the lightness and brilliancy which he has effected.”

In Normandy, Turner visited Dieppe’s French port twice before painting this canvas in his London studio. In this romantic view, steamboats and other signs of modernization are ignored in the artist’s imagination.

Turner has left us with many sketches of fishing vessels moored at Dieppe Harbour and the street views at Dieppe, with the dome of the Church of Saint-Jacques rising above the rooftops. The sketches were preparatory material for this oil painting, “Harbour of Dieppe.”

Dieppe Harbor was a bustling commercial hub, and Turner captured the throng, populating the waterfront with crowds of people going about their business.

Dieppe is a coastal community in the Normandy region of northern France, a port on the English Channel, at the mouth of the Arques river.

Dieppe was an important target in wartime, and the town was largely destroyed by an Anglo-Dutch naval bombardment in 1694.

It was rebuilt after 1696 in a typical French classical style with its unique features for a seaport. It was popularised as a seaside resort in 1824 with the introduction of new theatres.

During the later 19th century, Dieppe became popular with English artists as a beach resort. Prominent literary figures kept up with the latest fads of avant-garde France during “the season.”

Today the town is famous for its scallops and has a ferry service to Newhaven in England. Dieppe has a 15th-century castle and the churches of Saint-Jacques and Saint-Remi.

The Harbor of Dieppe

“The Harbor of Dieppe” by J.M.W. Turner

with “Your Choice of Name & Message” here

A Tour of the Frick Collection