A Tour of the Waterfalls of the Provinces by Katsushika Hokusai

“A Tour of the Waterfalls of the Provinces” by Katsushika Hokusai is a series of landscape woodblock prints by the Japanese ukiyo-e artist Hokusai.

Completed between 1833–34 and containing eight prints, it was the first ukiyo-e series to approach the theme of falling water.

“The Waterfall Where Yoshitsune Washed His Horse at Yoshino in Yamato Province” print is a touching depiction of the relationship between humans, animals, and nature.

The background consists of a waterfall flowing powerfully through a deep valley of trees and foliage. The tiers of water resemble giant hands embracing the earth with fingers spread open.

Hokusai’s detailed work can be seen in the two small figures washing the magnificent horse. However, elsewhere he has used thick, bold brushstrokes of white against the blue water.

The specks of white show the bubbles and foam of the waterfall.

The series was acclaimed for its innovative and expressive depictions.

The waterfalls take up most of each sheet, dwarfing the scenes’ human inhabitants, and are rendered by Hokusai with a powerful sense of life, reflecting his animistic beliefs. 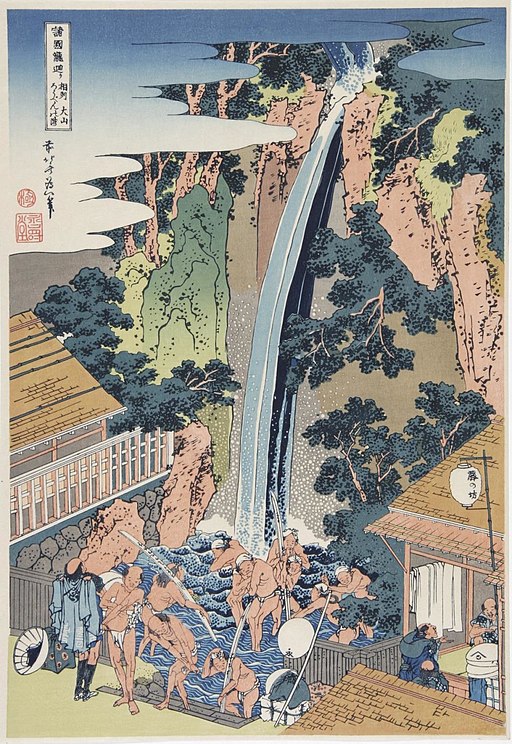 The Roben Waterfall at Mount Oyama in Sagami Province by Katsushika Hokusai shows the waterfall bursting from the cliffside, crashing into the pool below.

Using the falls, the pilgrims purify themselves on the way to the Oyama shrine. Hokusai captures the spirit of each waterfall in a vertical composition, balancing the power of nature and the nature of man.

The human figures are connecting these marvels of nature with the human rituals that surround them. Hokusai makes use of Prussian blue to lend depth to the falls while capturing pilgrims in various stages of bathing.

Kirifuri Waterfall at Kurokami Mountain in Shimotsuke by Katsushika Hokusai

Kirifuri Waterfall at Kurokami Mountain in Shimotsuke by Katsushika Hokusai

Falling Mist Waterfall (Kirifuri no taki), on Mount Kurokami (“Black-hair”) in Shimotsuke province (now part of Tochigi prefecture) is one of the famous falls of the mountainous Nikkö area.

The Waterfall descends about 100 feet in two steps as it falls, the water, broken up by the cliff, spreads itself into a moving tapestry of many cascades, creating a mist air.

Hokusai presents the falls in an extreme close-up view as a mystical pattern. The falling streams in the pool are superbly are printed in shades of blue.

The travelers looking up from below, are dwarfed by the scale of the waterfalls while on the right, other climbers are making the steep climb to the top. 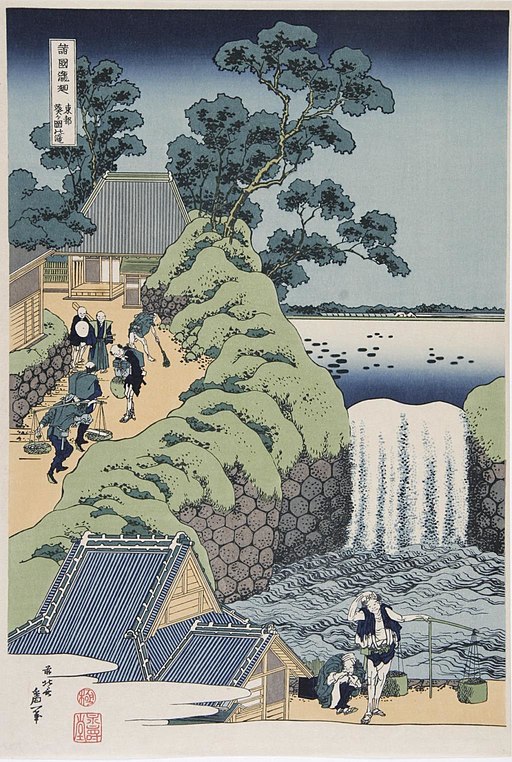 Waterfall at Aoi Hill by Katsushika Hokusai depicts a spillway for the release of the overflow of a pond, located in Aoigaoka (“Aoi Hill”) near the Toranomon Gate in Edo.

The waterfall is a short, broad drop of water from Tameike Pond to the outer moat of the shogun’s castle. The slope along the moat is the Aoizaka (“Aoi slope”), which leads to the top of the hill.

Here we see nature in a controlled urban setting, with the people engaged in every-day activities.

Yōrō Waterfall in Mino Province by Katsushika Hokusai is a traditional Japanese Ukyio-e style illustration of two travelers looking at a waterfall and some travelers resting at the side in a shelter.

Well-balanced colors of blue, green, yellow, and white bring together many elements in the print.

The introduction of color pigments from Europe in the nineteenth century, primarily Prussian blue, gave Japanese printmakers new opportunities to express the dramatic effects of sky and water. 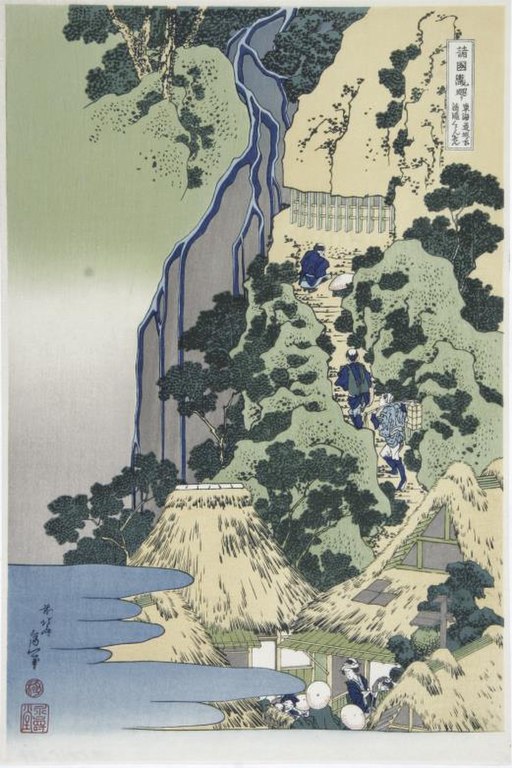 Travelers climbing a steep hill to reach the Kannon sanctuary by Katsushika Hokusai depicts a gently flowing waterfall that divides into veins of water.

The water flows through crevices as a group of travelers arrives at the huts at the bottom of the print.

Above them, other pilgrims can be seen climbing up a steep path towards a man kneeling in prayer.

Above the man paying is a lattice window at the entrance to a cave dedicated to Kanno. 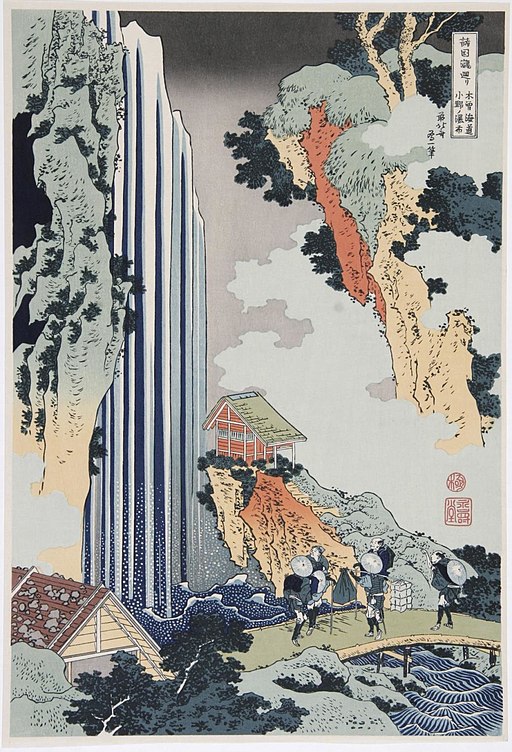 Ono waterfall at the Kisokaido by Katsushika Hokusai depicts the Falls near the town of Agematsu in Nagano Prefecture.

Hokusai depicts a small Shinto shrine that stands on a rocky promontory near the falls.

The Japanese have traditionally believed that remarkable natural phenomena indicate the presence of a Shinto god.

Waterfalls were often a destination for religious adepts, who purified themselves beneath the icy torrents. The people in this print gaze at the falls as they cross the bridge.

The Amida Falls in the Far Reaches of the Kisokaidō Road by Katsushika Hokusai depicts a round hollow between two steep banks, the water drops against the dark, rugged cliff.

Its exact location is not known and is probably a creation of Hokusai’s imagination. The rugged cliffs have some pine trees precariously growing.

On the left ledge, picnickers have spread a rug and enjoy the view while preparing their meal.

This print is the most dramatic composition of the Waterfall series, but it is effective in expressing the power of nature.

Katsushika Hokusai (1760 – 1849) began painting at the age of six, and at sixteen, he was apprenticed as an engraver and spent three years learning the trade.

At the same time, he began to produce his illustrations. At eighteen, he was accepted as an apprentice to Katsukawa Shunshō, one of the foremost ukiyo-e artists of the time.

Ukiyo-e is a genre of Japanese art that flourished from the 17th through the 19th centuries. Its artists produced woodblock prints and paintings of beautiful women, kabuki actors, sumo wrestlers, scenes from history and landscapes.

A Tour of Japanese Art

Hokusai: beyond the Great Wave

“There are two kinds of a fool:
those who have never climbed Mount Fuji,
and those who have climbed it more than once.”
– Japanese Proverb