“Lady Godiva” by John Collier portrays Lady Godiva on her well-known ride through Coventry, England. Painted in 1898, it is in the style of the Pre-Raphaelite Brotherhood.

Lady Godiva was a late Anglo-Saxon noblewoman who is well documented as the wife of the Earl of Mercia and a patron of various churches and monasteries.

Today, she is mainly remembered for a legend dating back at least to the 13th century, in which she rode naked, covered only in her lengthy hair, through the streets of Coventry.

She took this action to gain a remission of the oppressive taxation that her husband, Leofric, imposed on his tenants.

The name “Peeping Tom” for a voyeur originates from later versions of this legend, in which a man named Thomas watched her ride and was struck blind or dead.

The Legend of the Nude Ride

The legend of the nude ride is first recorded in the 13th century. According to the story, Lady Godiva took pity on Coventry’s people, who were suffering under her husband’s oppressive taxation.

Lady Godiva appealed again and again to her husband, who refused to reduce the tolls. Growing tired of her appeals, he said he would grant her request if she would strip naked and ride on a horse through the streets of the town, assuming that she would not undertake such an act.

Lady Godiva took him at his word, and after proclaiming that all persons should stay indoors and shut their windows, she rode through the town, clothed only in her long hair. 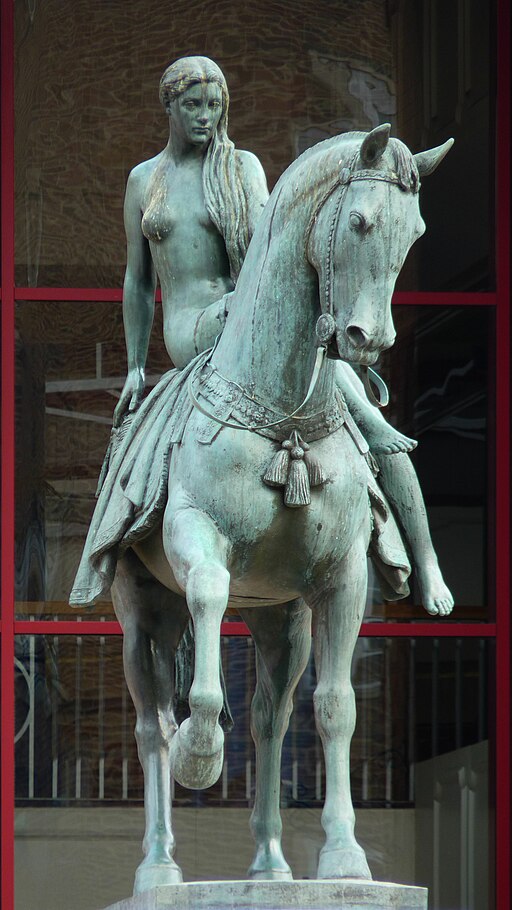 Just one person in the town, a tailor who afterward became known as Peeping Tom, disobeyed her proclamation.

Other attempts to find a more plausible rationale for the legend include one based on the custom for penitents to make a public procession in a sleeveless white garment similar to a slip.

Thus Godiva might have gone through town as a penitent in her nightgown. Godiva’s story could have passed into folk history to be recorded in a romanticized version.

Another theory is that Lady Godiva’s “nakedness” might refer to her riding through the streets stripped of her jewelry and her noble rank’s accouterments.

However, these attempts to reconcile known traditions with legend are weak. In the earliest accounts, the word “naked” is only understood to mean “without any clothing whatsoever.”

Godiva was the wife of Leofric, Earl of Mercia. The Old English name Godgifu or Godgyfu meant “gift of God.” Godiva is the Latinised form.

Both Leofric and Godiva were generous benefactors to religious houses. After Leofric died in 1057, she lived on until sometime between the Norman Conquest of 1066 and 1086.

In the Domesday survey, she is mentioned as one of the few Anglo-Saxons and the only woman to remain a major landholder shortly after the conquest.

“Godiva” is a poem written in 1840 by the poet Alfred, Lord Tennyson.

The poem is based on the story of Countess Godiva, who rode naked through the streets of Coventry. She did this after her husband promised that he would remit oppressive taxes on his tenants if she agreed to do so.

“Then she rode forth, clothed on with chastity:
The deep air listen’d round her as she rode,
And all the low wind hardly breathed for fear.
…whence reissuing, robed and crown’d,
To meet her lord, she took the tax away
And built herself an everlasting name.”
– “Godiva” by Alfred, Lord Tennyson

The story of Peeping Tom tells that he was alone among the townsfolk who spied on the Lady Godiva’s naked ride.

The story became popular lore in Coventry, and the oldest document that mentions “Peeping Tom” by name is a record in Coventry’s official annals, dating to 1773.

Additional legends proclaim that Peeping Tom was later struck blind as heavenly punishment or that the townspeople took the matter into their own hands and blinded him.

John Collier (1850 – 1934) was an English artist and an author. He painted in the Pre-Raphaelite style and was one of the most prominent portrait painters of his generation.

Collier was from a talented and successful family. In due course, Collier married into the family of Thomas Henry Huxley, President of the Royal Society. Collier’s first wife, in 1879, was Marian Huxley.

She was a painter who studied, like her husband, at the Slade and exhibited at the Royal Academy and elsewhere. After their only child’s birth, she was taken to Paris for treatment, where she died in 1887.

Collier’s daughter by his first marriage, Joyce, was a portrait miniaturist and a member of the Royal Society of Miniature Painters.

In 1889 Collier married Mady’s younger sister Ethel Huxley. With his second wife, he had a daughter and a son.

Sixteen of John Collier’s paintings are now in the National Portrait Gallery collections in London, and two are in the Tate Gallery. Many other museums also hold his art.

Who was the real Lady Godiva?

“Then she rode forth, clothed on with chastity:
The deep air listen’d round her as she rode,
And all the low wind hardly breathed for fear.
…whence reissuing, robed and crown’d,
To meet her lord, she took the tax away
And built herself an everlasting name.”
– “Godiva” by Alfred, Lord Tennyson