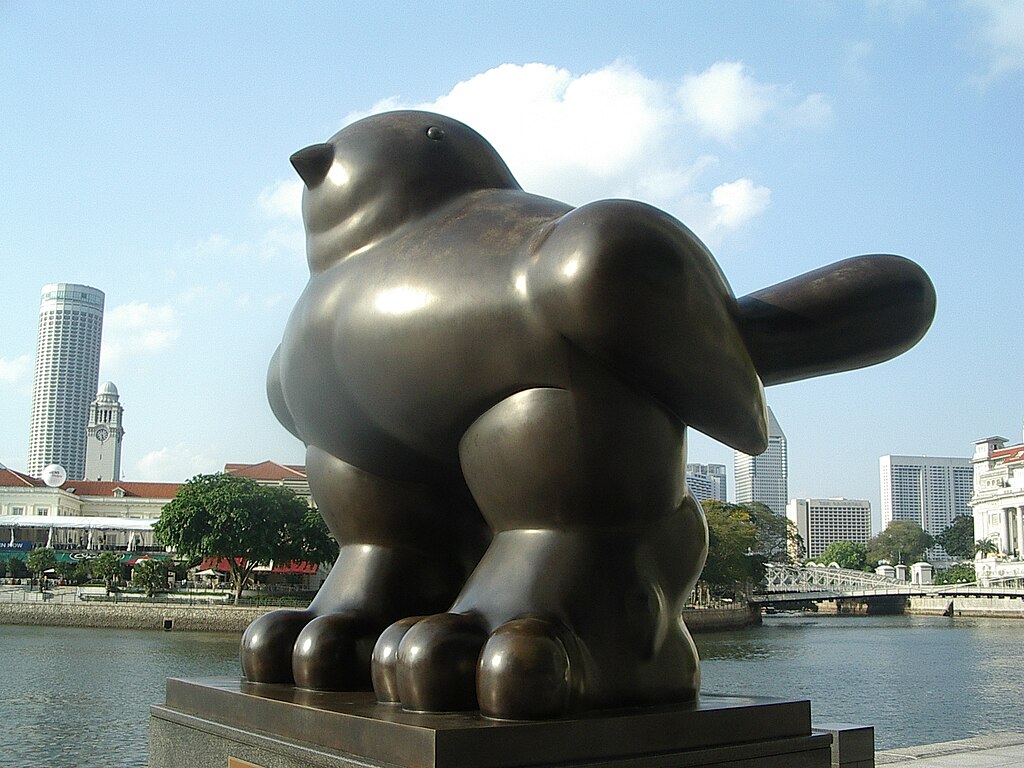 Public Art refers to a specific art genre in any media whose form, function, and meaning are created for the general public through an open process.

Public art is visually and physically accessible to the public; it is installed in public space, usually outside. Public art embodies universal concepts, and it has aesthetic qualities in form or theme.

Independent art created in the public realm, for example, graffiti and street art, lacks official or tangible civil sanction and occupies an ambiguous space within the public art genre.

These forms can overlap to suit a particular environment.

Fernando Botero Angulo (born 1932) is a Colombian figurative artist and sculptor. His signature style is known as “Boterismo,” which depicts figures in large, exaggerated volume, which can represent political criticism or humor, depending on the piece.

He is one of the most recognized artists from Latin America, and his art can be found in popular public places all around the world. In the last three decades, he has mostly worked out of Paris. He has achieved recognition for his paintings, drawings, and sculpture, with exhibitions across the world.

Botero’s work has concentrated on situational portraiture. His paintings and sculptures are united by their proportionally exaggerated, or “fat” figures, as he once referred to them. Botero explains his use of these “large people” in the following way: “An artist is attracted to certain kinds of form without knowing why. You adopt a position intuitively; only later do you attempt to rationalize or even justify it.”

“The Thinker” by Auguste Rodin

In 1889, Rodin exhibited this sculpture independently of The Gates, giving it the title “The Thinker,” and in 1902, he embarked on this larger version.

Consequently, it has since become one of his most recognized masterpieces and is usually placed on a stone pedestal. The nude male figure is sitting on a rock with his chin resting on one hand, deep in thought. The image is often used as an image to represent philosophy.

“Oval with Points” by Henry Moore

“Oval with Points” by Henry Moore is an enigmatic abstract sculpture cast in bronze. The sculpture is a modulating oval ring with rounded edges.

The inside edge of the large hole has two protrusions rising from the sides and narrowing to sharp points that almost meet at the center of the hole, creating a sense of dynamic tension.

The points divide the hole into two spaces, a smaller one above and a larger one below, like a figure 8. The shape of the space is interpreted as resembling a human form with a head and a torso.

“LOVE” by Robert Indiana is a Pop Art image consisting of the letters L and O stacked over the letters V and E in bold Didone type. The O is slanted sideways with a slanted oblong space making the image dynamic.

The original image had green and blue spaces backing red lettering. It was created as a print image for a Museum of Modern Art Christmas card in 1965. The “LOVE” image was adapted in the 1960s by the hippie free love movement.

One of the wealthiest of the town leaders volunteered, and five other burghers volunteered to join him. It is this moment when the volunteers leave the city gates that this sculpture depicts. Rodin captured the poignant mix of defeat, heroic self-sacrifice, and willingness to face imminent death.

The Equestrian Statue of Marcus Aurelius depicts the famous Roman Emperor on horseback. The emperor is over life-size and extends his hand in a gesture used by emperors when addressing their army and legions.

It is an image designed to portray the Emperor as victorious and all-conquering. It is believed that a conquered enemy had initially been part of the sculpture, based on accounts from medieval times.

The reports suggest a figure of a bound barbarian chieftain once cowered underneath the horse’s front right leg. However, Marcus Aurelius is depicted without weapons or armor; he is portrayed as a bringer of peace rather than a military hero.

That is how Marcus Aurelius saw himself and his reign. The statue was erected ca. 175 AD, during the Marcus Aurelius’s reign, but its original location is unknown and debated.

Koons’s replica sculpture was constructed of polished cast stainless steel and cast in 1987. The statue depicts a full-length figure of a man, with a basket on his back, and a basket at the ground near his right leg, all in shiny finish surfaces.

The original Kiepenkerl sculpture was destroyed during World War II and was re-created in cast metal by Albert Mazzotti Jr in 1953.

The replacement statue now stands in a small square in the Old Quarter of Münster, Germany. The original monument symbolized the man who comes to town from the country with produce to sell in his basket carried on the back.

“Broken Obelisk” by Barnett Newman is a sculpture that fuses the universal symbols of ancient Egypt, the pyramid, and the obelisk to reimagine the inverted obelisk shaft as a beam of light.

Our perception and association of pyramids and broken columns with ancient history has been reinterpreted into a current model of experience beyond the ordinary or physical level.

“Broken Obelisk” is a sculpture in the public art space that acts as a philosophical insight into knowledge, reality, and existence.

“Broken Obelisk” was designed between 1963 and 1967 and is fabricated from three tons of Cor-Ten steel, which acquires a rust-colored patina.

“Newton after Blake” by Eduardo Paolozzi

“Sphere Within Sphere,” also known as “Sfera con Sfera,” is a series of sculptures created by sculptor Arnaldo Pomodoro. The sculpture depicts an enormous metal sphere with a cracked surface, revealing an intricate interior with another cracked sphere inside.

The internal layers resemble the gears or cogwheels of a machine that symbolizes the complexity of the world. The fractured cracks symbolize the fragility of our society.

Pomodoro began his series of spheres in the 1960s with Sphere no. 1 and has continued for nearly forty years designing the globe-like pieces, each depicting different maps of destruction.

Each of the outer balls is fractured, revealing an intricate interior that unveils yet another cracking orb. The design of the internal layers mimics the gears of a clock or the inner workings of a grand piano, revealing the hidden complexity.

Pomodoro created the first version for the Vatican Museum in the 1960s and later began creating similar versions for many other institutions that can now be found in choice locations all over the world.

Why do we need Public Art?

How To Look at Public Art: A Six-Year-Old Explains

Top 50 Most Cool Public Art In the World

“The aim of art is to represent not the outward appearance of things, but their inward significance.”
– Aristotle