Newton after Blake” by Eduardo Paolozzi

The sculpture includes Paolozzi’s self-portrait as the naked Newton, measuring the universe with his dividers. The eyes were copied from Michelangelo’s David.

The sculpture symbolizes a merging of the arts and the sciences and illustrating how Newton changed our view of the world to one determined by mathematical laws.

The sculpture shows the body resembling a mechanical object, joined with bolts at the shoulders, elbows, knees, and ankles.

The sculpture explicitly makes visible the seams of the sculptors’ technique of dividing his model and reassembling the pieces. 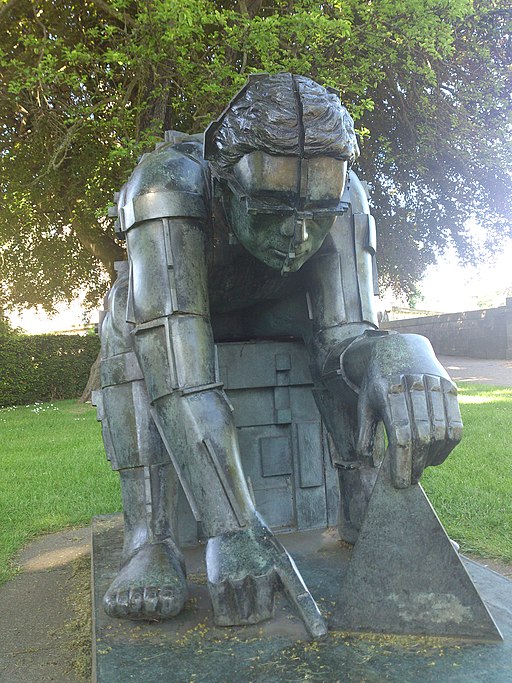 “Master of the Universe” by Eduardo Paolozzi – Scottish National Gallery Of Modern Art in Edinburgh, 1989

The architect of the new British Library, which was constructed from 1982 to 1999, planned for a sculpture at the junction of the two main axes in the piazza of the library.

Paolozzi was already working on a sculpture of Newton and was commissioned to create the statue for the library, which was installed in 1995.

A similar sculpture, “Master of the Universe,” from 1989, is at the Scottish National Gallery Of Modern Art in Edinburgh, with another example that can be found in Kowloon Park, Hong Kong.

Several “Newton after Blake” by Eduardo Paolozzi sculptures are exhibited around the world:

Eduardo Paolozzi was born in Scotland, the eldest son of Italian immigrants. In 1940, during World War II, Paolozzi was interned along with most other Italian men in Britain.

His father, grandfather, and uncle, who had also been detained, were among the 446 Italians who drowned when the ship carrying them to Canada, was sunk by a German U-boat.

Paolozzi first studied at the Edinburgh College of Art in 1943 and then worked in Paris. While in Paris from 1947 to 1949, Paolozzi became acquainted and was influenced by the Surrealists.

His sculptures made in the mid-1950s with surfaces, studded with found objects and machine parts, first gained him recognition.

Later in life, he received many awards and honors and was knighted by Queen Elizabeth II in 1989 as Knight Bachelor.

Newton by William Blake is a print, first completed in 1795 but reworked and reprinted in 1805.

Isaac Newton is shown sitting naked and crouched on a rocky outcropping covered with algae, at the bottom of the sea. He is focused upon the diagram he is drawing with a compass upon a scroll while ignoring the world around him.

Blake’s opposition to the Enlightenment was deeply rooted. In his annotation to an engraving, Blake wrote “Art is the Tree of Life. Science is the Tree of Death.”

Newton’s theory of optics was especially offensive to Blake, who made a clear distinction between the vision of the “vegetative eye” and “spiritual vision.” Blake claimed to regularly experience visions of a spiritual nature.

Blake’s print served as the basis for Eduardo Paolozzi’s giant bronze sculpture Newton, after William Blake, which resides in the piazza of The British Library.

Eduardo Paolozzi, the ‘Godfather’ of the Pop Art

“I can calculate the motion of heavenly bodies, but not the madness of people.”
– Newton