“Sphere Within Sphere” by Arnaldo Pomodoro

“Sphere Within Sphere,” also known as “Sfera con Sfera,” is a series of sculptures created by sculptor Arnaldo Pomodoro. The sculpture depicts an enormous metal sphere with a cracked surface, revealing an intricate interior with another cracked sphere inside.

The internal layers resemble the gears or cogwheels of a machine that symbolizes the complexity of the world. The fractured cracks symbolize the fragility of our society.

Pomodoro began his series of spheres in the 1960s with Sphere no. 1 and has continued for nearly forty years designing the globe-like pieces, each depicting different maps of destruction.

Each of the outer balls is fractured, revealing an intricate interior that unveils yet another cracking orb. The design of the internal layers mimics the gears of a clock or the inner workings of a grand piano, revealing the hidden complexity.

Pomodoro created the first version for the Vatican Museum in the 1960s and later began creating similar versions for many other institutions that can now be found in choice locations all over the world.

“A sphere is a marvelous object, from the world of magic, wizards, whether it is of crystal or bronze, or full of water…
It reflects everything around it, creating such contrasts that it sometimes is transformed,
becoming invisible, leaving only its interior, tormented and eroded, full of teeth.”

The spheres have been compared to a clock or a grand piano. The works have been interpreted as reflecting a continual process of self-destruction and regeneration.

“That’s what drives me to make the spheres:
breaking these perfect, magic forms in order reveal its internal ferment,
mysterious and alive, monstrous and yet pure;
so I create a discordant tension, a conflict,
with the polished shine: a unity composed of incompleteness.” 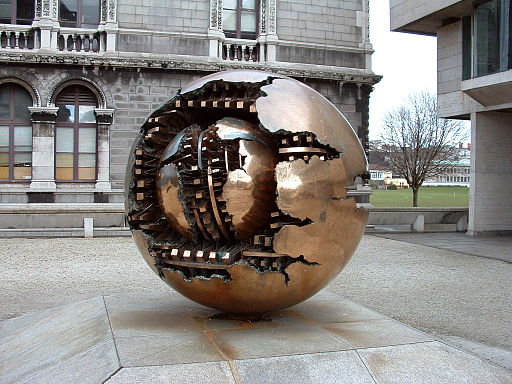 One of Pomodoro’s enormous spheres, with its layers of complexity, has become the centerpiece in the Courtyard of the Pinecone at the Vatican Museum.

The structure can not be missed as it appears golden in the sun and measures 4 meters (13 feet) in diameter.

The sculpture’s round shape echoes the form of Earth, making clear what the artist’s intentions.

“Sphere Within Sphere” is also installed at the United Nations in New York, where the sculpture also makes clear that the complexity of our world can easily it can be torn apart.

“In my sculpture, the shape of today’s world contains within itself the form of the ‘ideal city’
as conceived by the artists of the Italian Renaissance.
This, in turn, contains my hopes and dreams, and those of countless other citizens of the world.”

Versions of the sculpture can be seen in many settings worldwide, including:

“Sphere within a Sphere” – Hirshhorn Museum in Washington, D.C.

Arnaldo Pomodoro (born:1926) is an Italian sculptor who lives and works in Milan.

Pomodoro’s Sphere Within Sphere (Sfera con Sfera) can be seen at many museums and institutions around the world.

On Form and Movement, Pomodoro is quoted as saying:

“According to me, sculpture must be projected into space to remove, as far as possible,
the weight from the material and the work’s fixed base.
I have always tried to express movement as an intensification of a condition of imbalance
to create a striking contrast to any stasis or any reached or predictable order.”

A Tour of the Hirshhorn Museum and Sculpture Garden

Sphere Within Sphere by Arnaldo Pomodoro

Arnaldo Pomodoro “Sphere within a Sphere”

“I have always tried to express movement as an intensification of a condition of imbalance to create a striking contrast to any stasis or any reached or predictable order.”
– Arnaldo Pomodoro