Madonna and Child by Raphael

Throughout his career, he painted many Madonna and Child images using different painting materials to celebrate the tender emotions between a young mother and her child.

A Tour of Madonna and Child Paintings by Raphael

The painting was the last of Raphael’s Florentine paintings before he left for Rome. An inscription on the border of Madonna’s bodice, “MDVIII.R.V.PIN” indicates that it was painted in 1508 by Raphael of Urbino.

It is more complex than a similar painting the Small Cowper Madonna of a few years earlier, though their intimacy closely relates both paintings.

Raphael may have been influenced by Leonardo da Vinci’s talent for creating a natural affection.

The portrayal of the infant’s energy and playfulness is compelling as he reaches for Madonna’s top as if wanting to nurse. Both paintings bear the name of their former owners.

The inscription in the book introduces the Nones, which is recited daily by all monastic communities.

Raphael has created a meditation piece of profoundly quality, which explains why Raphael’s Madonna and Child Paintings were in such high demand.

Nones, the Ninth Hour, or the Midafternoon Prayer, is a fixed time of prayer of the Divine Office of almost all the traditional Christian liturgies.

It consists mainly of psalms and is said around 3 pm, about the ninth hour after dawn.

In the practice of Christianity, canonical hours mark the divisions of the day in terms of periods of fixed prayer at regular intervals. A book of hours typically contains a selection from such prayers.

This painting is an early work by Raphael showing the influence of Raphael’s teacher Perugino.

Raphael created several different Madonna and Child compositions centered on the motif of the Madonna holding a book.

They are the Solly Madonna and the Madonna Colonna in Gemäldegalerie, Berlin, the Norton Simon Museum Madonna, the Conestabile Madonna in Hermitage Museum, Saint Petersburg, and the Madonna del Cardellini at the Uffizi, Florence.

The painting is called the Solly Madonna because it was owned by the British banker and art collector Edward Solly (1776–1848).

The Colonna Madonna is named after the Colonna family, an Italian papal noble family.

“Conestabile Madonna” by Raphael portrays the Madonna holding the Child while reading a book. The landscape of the background with snow-capped peaks is particularly unusual.

This small devotional piece was the last work painted by Raphael in Umbria before moving to Florence.

In 1881 the painting was transferred from wood to canvas for its preservation.

During the preservation process, it was discovered that in the initial version, the Madonna was contemplating a pomegranate instead of a book. The pomegranate symbolized the Passion

The painting’s name is derived from the Conestabile family of Perugia, from whom Alexander II of Russia acquired it in 1871.

The Tsar presented it as a gift to his wife, Maria Alexandrovna. The painting is still in its original frame, decorated with ornament assumed to have been made to a design by Raphael himself. 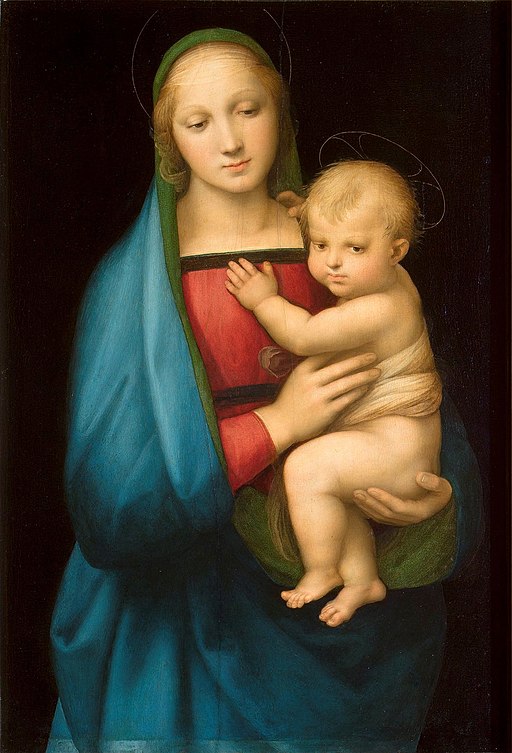 “Madonna del Granduca” by Raphael was probably in 1505, shortly after Raphael had arrived in Florence.

The influence of Leonardo da Vinci, whose works he got to know there, can be seen in the use of Sfumato.

The painting is named after one of its owners, the Grand Duke of Tuscany, Ferdinand III.

Sfumato is a painting technique for softening the transition between colors, mimicking an area beyond what the human eye is focusing on.

Leonardo da Vinci was the most prominent practitioner of Sfumato, based on his research in optics and human vision. He used it in many of his famous works. The word Sfumato comes from the Italian phrase fumo for “smoke.”

“without lines or borders, in the manner of smoke.”

Raphael managed an unusually large workshop and, despite his early death at 37, he left a large body of work. Many of his works are found in the Vatican Palace.

The frescoed Raphael Rooms are the central and largest works of his career. The best-known work is The School of Athens in the Vatican.

After his death, the influence of his rival Michelangelo was more widespread until the 18th and 19th centuries.

Since then, Raphael’s harmonious qualities gained recognition as the highest models from the Renaissance.

Raphael’s career can best be understood as three phases and three styles. First, his early years in Umbria up to 1504.

Then about four years during1504–1508 when he absorbed the artistic traditions of Florence. Finally, during 1508 – 1520, his last triumphant years in Rome, working for two Popes and Church associates.

Raphael, Madonna of the Goldfinch

The Madonna and Child

“Look at life with the eyes of a child.”
– Henri Matisse