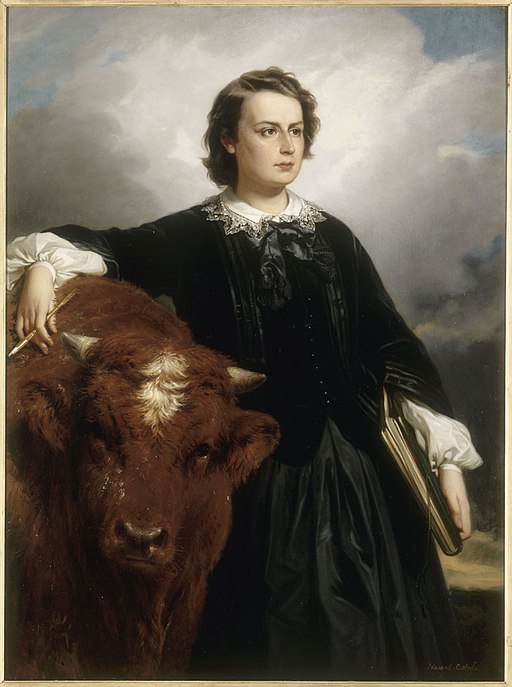 Rosa Bonheur (1822 – 1899) was a French artist, a painter of animals, and sculptor, known for her artistic realism. Bonheur was considered to be the most famous female painter during the nineteenth century.

Her most famous work is this her monumental, “The Horse Fair.” As a realist painter, she broke from tradition in depicting the horse eye as it is, and not using anthropomorphism for emotional effect.

Her work led to international fame and recognition; when she traveled to Scotland, she met Queen Victoria, who greatly admired Bonheur’s work.

Bonheur routinely wore masculine clothes at home and in the country. She is quoted as saying:

“I am a painter. I have earned my living honestly. My private life is nobody’s concern.”

Bonheur used a series of sketches of draught horses, which she had made at the Paris horse market. She attended the market twice weekly for a year and a half for her work.

In addition to studies at the Paris horse market, Bonheur also modeled her animals on those from the Paris Omnibus Company, which were still horse-powered.

As a realist painter, she broke from tradition in depicting the horse eye as it is, and not using anthropomorphism for emotional effect.

In preparation for her research for this painting, Rosa Bonheur sought permission from the Paris police to dress as a man, to avoid drawing attention to herself.

She had earlier studied at a Paris slaughterhouse in 1845, a typical activity for an animal painter that she was the first woman to engage in, and had experienced harassment as a visible woman. Museum: Metropolitan Museum of Art – MET

“The Highland Shepherd” by Rosa Bonheur depicts a Scottish shepherd dressed in the traditional highlander attire of the 1800s.

As a realist painter, Bonheur painted scenes in her painting from her first-hand experience. Her monumental artworks in France led to international fame and recognition, and as she traveled to Scotland, she met Queen Victoria en route.

The Queen admired Bonheur’s work, and while in Scotland, she completed sketches for Highland Shepherd.

This painting depicts a way of life in the Scottish highlands that was disappearing and had enormous general appeal.

To draw animals, Rosa Bonheur studied at a Paris slaughterhouse in 1845, an essential activity for an animal painter that she was the first to engage in as a woman.

She became very popular in England, and she was decorated with the French Legion of Honour in 1865. She was promoted to Officer of the order in 1894, making her the first female artist to be given this award. Museum: Kunsthalle Hamburg

“The eye is it not the mirror of the soul in all living creatures?”

“I am a painter. I have earned my living honestly. My private life is nobody’s concern.”

“But the suit I wear is my work attire, and nothing else.”

“The epithets of imbeciles have never bothered me.”

“I owe my great and glorious ambition for the sex to which I proudly belong and whose independence I shall defend until my dying day.”

“The point of departure must always be a vision of the truth. The eye is the route of the soul, and the pencil or brush must sincerely and naïvely reproduce what it sees.”

“The horse is, like man, the most beautiful and the most miserable of creatures, only, in the case of man, it is vice or property that makes him ugly. He is responsible for his decadence, while the horse is only a slave.”

“Ah! If nations could only agree to employ their resources to perfect agriculture and improve transportation, and to bring all their girl children a good education, what an explosion of happiness there would be on earth!”

“The horse is, like man, the most beautiful and the most miserable of creatures.”

“My dream is to show the fire which comes out of the horses’ nostrils; the dust which rises from their hooves. I want this to be an infernal waltz.”

“Art is a tyrant. It demands the heart, brain, soul, body.”

“I became an animal painter because I loved to move among animals. I would study an animal and draw it in the position it took, and when it changed to another position, I would draw that.”

“I became an animal painter because I loved to move among animals.“
– Rosa Bonheur