Sandro Botticelli (1445 – 1510) was an Italian painter of the Early Renaissance who belonged to the Florentine School under the patronage of Lorenzo de’ Medici.

Botticelli lived all his life in the same neighborhood of Florence, and his only significant time elsewhere was the few months he spent painting in Pisa in 1474 and his work at the Sistine Chapel in Rome in 1481–82.

A Virtual Tour of Sandro Botticelli

“Venus and Mars” by Sandro Botticelli portray Venus, the Roman goddess of love, and Mars, the god of war, as a coupled reclining in a forest setting, surrounded by playful baby satyrs.

It is an allegory of beauty and bravery, representing an ideal view of sensuous marriage and love.

Based on the subject of the composition and the unusual wide format of this masterpiece, the painting was probably intended to commemorate a wedding.

It was created to be set into a piece of furniture to adorn the bedroom of the bride and groom. Museum: The National Gallery, London

The subject of this painting is the legend of LucretiaShe was a noblewoman who was raped by the son of the king of Rome, Sextus Tarquinius. Lucretia, believing that the rape dishonored her and her family.

She committed suicide by stabbing herself with a dagger after telling what had occurred to her. Museum:  Isabella Stewart Gardner Museum, Boston

The Virgin and the Child in a Niche

“The Virgin and the Child in a Niche” by Sandro Botticelli portrays the Madonna and Child in an intimate and playful composition.

Botticelli’s Virgins are always beautiful, in the same idealized way as his mythological figures, and often richly dressed in a contemporary style.

In this version, we can see the Madonna tickling the Child with the forefinger of her right hand, and the Child’s toe appears to respond in a very naturalistic way to his mother’s playful gesture. Museum: Museo Soumaya 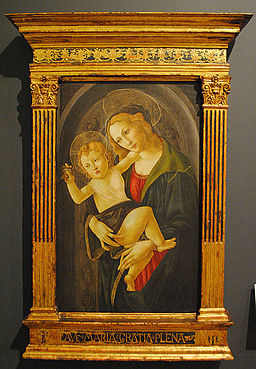 The Birth of Venus

“The Birth of Venus” by Sandro Botticelli depicts the goddess Venus emerging from the sea after her birth fully grown.

Venus is the Roman goddess of love, beauty, desire, fertility, prosperity, and victory. In mythology, she was the mother of the Roman people through her son, Aeneas, who survived the fall of Troy and fled to Italy.

Venus was central to many religious festivals and revered in the Roman religion. Museum: Uffizi Gallery

“Primavera” by Sandro Botticelli depicts a group of figures from classical mythology in a garden, brought together by Botticelli as an allegory based on the promised renewal of Spring and the seasons.

The meaning of this masterpiece is debated by art historians, as the composition draws from many classical and Renaissance literary sources. Museum:  Uffizi Gallery

Adoration of the Magi

The “Adoration of the Magi” by Sandro Botticelli is based on the traditional subject of the Nativity of Jesus in which the three Magi, who found Jesus by following a star and then laid gifts before him and worship him.

This story is in the Bible by Matthew 2:11: “On entering the house, they saw the child with Mary, and they knelt and paid homage to him. Then, opening their treasure chests, they offered him gifts of gold, frankincense, and myrrh”.

In this painting by the Italian Renaissance master Botticelli, there are many more people present, and the scene is dominated by members of the Medici family and their close friends.

Painted in 1475, it is one of at least seven versions of The Adoration of the Magi created by Botticelli and one of the earliest in his career.  Museum: Uffizi Gallery

The Trials of Moses

“The Trials of Moses” by Sandro Botticelli is a fresco, executed in 1481–1482 at the Sistine Chapel, Rome. The fresco shows four episodes from Moses’ life, taken from Exodus.

Firstly, Moses is depicted on the right, killing the Egyptian who was mistreating a Hebrew, and he is then shown fleeing to the desert.

Moses is distinguishable in the scenes by his yellow dress and the green cloak. Museum:   Vatican Museums, Sistine Chapel, Rome 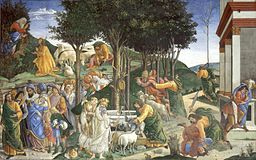 The “Mystical Nativity” by Sandro Botticelli depicts the joy and celebration of earthly and heavenly delight at the birth of Jesus.

The angels are dancing at the top of the painting, and above them is Botticelli’s name, but also some apocalyptic and troubling words.

Botticelli believed himself to be living during the Great Tribulation due to the upheavals in Europe at the time and the preaching of the time that was predicting Christ’s return, as stated in the Bible.

It is Botticelli’s only signed work and has an unusual iconography for a Nativity. Museum:  The National Gallery, London

Pallas and the Centaur

“Pallas and the Centaur” by Sandro Botticelli depicts a centaur with bow and arrows and a female figure holding a very elaborate halberd. She is clutching the centaur’s hair, and he is submissive to her.

The female character was called Camilla in the earliest record of the painting, but later she is called Minerva.

Minerva was the Roman equivalent of Pallas Athene, and this description of “Pallas” for the woman has been adopted as her name. Museum: Uffizi Gallery

Portrait of a Lady Known as Smeralda

“Portrait of a Lady Known as Smeralda” by Botticelli has an inscription on the windowsill, identifying this portrait as Smeralda Bandinelli (Brandini). This painting is a typical example of Botticelli’s early portraits.

Smeralda was a member of a respected Florentine family, the grandmother of the Florentine sculptor Baccio Bandinelli.

The identification of the sitter is based on the old, but not original, inscription at the bottom of the picture: “Smeralda di M.Bandinelli Moglie di VI… Bandinelli.”

A sign of her rank and respectable status is the handkerchief which she is holding in hand placed across her body.

From archive documents, it is known that in 1469 Smeralda was 30; her husband Viviano Brandini was 38, and they had three children.

She was the mother of the prominent Florentine goldsmith Michelangelo de Viviano de Brandini of Gaiuole, and grandmother of the sculptor Baccio Bandinelli.

Sandro Botticelli: A collection of 139 paintings

A Virtual Tour of Famous Artists, you should Know

After 500 Years, A Clue To Who Inspired Botticelli’s ‘Birth Of Venus’

A Virtual Tour of Women Artists, you should Know

“We know him as the man who painted Primavera and The Birth Of Venus. The goddesses and ancient subjects he chose represented virtues that were meant to inspire people. Then he went through a dark phase when he was listening to the sermons of Savonarola, who preached against the worldly pleasures of the Renaissance. But Botticelli’s works live on, inspiring people to this day. Five hundred years after his death, he still has thousands of fans!”
– Mary Pope Osborne