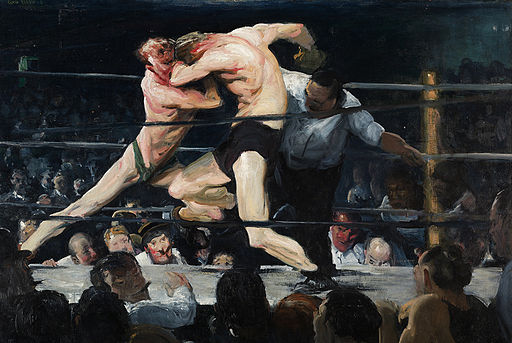 Boxing in Art by George Bellows

For many, boxing was an analogy for the notion that only the strongest and fittest would flourish in modern society.

Bellows used quick strokes to create a blurred image, simulating the two fighters in motion. He also chose a low point of view to put the viewer among the crowd watching the fight. George Bellows said:

“I don’t know anything about boxing, I’m just painting two men trying to kill each other.”

This painting is part of the Ashcan School movement known in particular for depicting scenes of daily life in early twentieth-century New York City, often in the city’s more impoverished neighborhoods.

Bellows drew inspiration from the rich black tonalities and satire of the Spanish master Francisco de Goya to depict the atmospheric haze that envelops the scene. Bellows’s technique for rendering the crowd owes much to the French painter, Honoré Daumier.

Bellows was part of the Ashcan School, which was an artistic movement in the United States during the early 20th century.