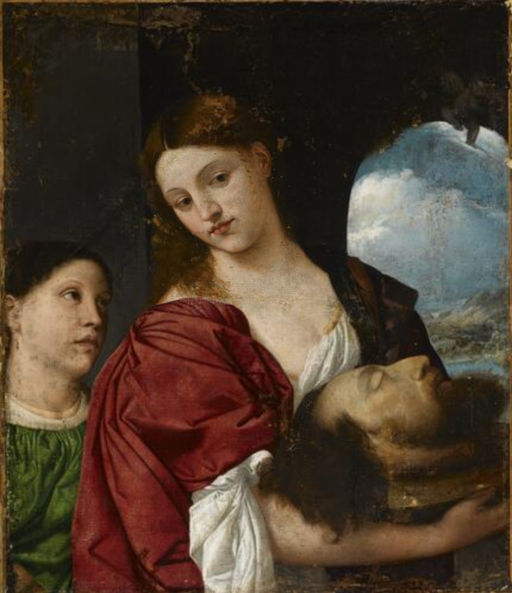 “Salome with Head of John the Baptist” by Titian

This daughter of Herodias is identified as Salome. Herodias, her mother, bore a grudge against John for proclaiming that Herod’s marriage to her was unlawful, so she encouraged her daughter to demand that John be executed.

“The daughter of Herodias came in and danced,
pleasing Herod and those dining with him.
The king said to the girl:
“Ask me for whatever you want, and I will give it to you.”
Yes, he swore to her: “Whatever you ask me for,
I will give it to you, up to half my kingdom.”
So she went out and said to her mother: “What should I ask for?”
She said: “The head of John the Baptist.”
She immediately rushed into the king and made her request, saying:
“I want you to give me right away on a platter
the head of John the Baptist.”
Although this deeply grieved him,
the king did not want to disregard her request,
because of his oaths and his guests.
So the king immediately sent a bodyguard
and commanded him to bring John’s head.
So he went off and beheaded him in the prison
and brought his head on a platter.
He gave it to the girl, and the girl gave it to her mother.”

Historically, some have considered the main figure in the painting to be the Queen Herodias and the younger girl to be her daughter Salome.

However, because of the painting’s long history, multiple versions, and many owners, the painting has also been considered to represent Judith with the Head of Holophernes.

In the Old Testament Book of Judith, Holofernes was an Assyrian invading general dispatched by Nebuchadnezzar. The general laid siege on a city that almost fell. Holofernes’s advance stopped the water supply to Bethulia, and the people lost heart.

The city was saved by Judith, a beautiful Hebrew widow who entered Holofernes’s camp, seduced him, then beheaded him while he was drunk. She returned to her city home with the severed head, and the Hebrews defeated the enemy.

In the many paintings of “Judith with the Head of Holofernes,” the composition includes a maidservant following the Book of Judith, which mentions a maidservant.

In addition to the alternative theories on the subject, there are also several early repetitions that Titian and/or his workshop made.

The version exhibited at the Norton Simon Museum, Pasadena, has been considered the best of the workshop versions.

Titian was known to have a large workshop, where students duplicated many of his most popular compositions. Some paintings were finished or corrected by Titian himself, allowing them to be sold as the work of the master.

For “Salome with Head of John the Baptist,” at least four original versions are known to have been made.

The original was made in 1515 by the Italian late Renaissance painter Titian is exhibited at the Doria Pamphilj Gallery in Rome. Other Titian painting of this subject with different compositions also exist in various other museums.

Salome with the Head of John the Baptist, 1515 – Doria Pamphilj Gallery, Rome

Tour of the Norton Simon Museum