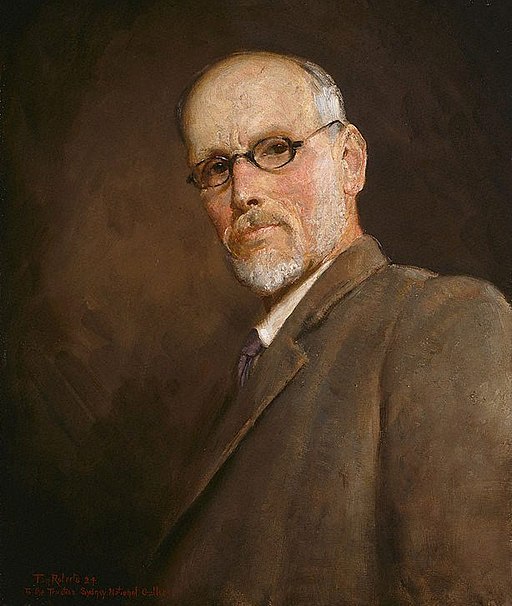 Thomas William “Tom” Roberts (1856 – 1931) was an English-born Australian artist. After attending art schools in Melbourne, he traveled to Europe in 1881 to further his training, and returned home in 1885, “primed with whatever was the latest in art.”

He did much to promote “en Plein air” painting and encouraged other artists to capture the national life of Australia.

Tom Roberts was a leading figure in promoting open (in full) air painting and encouraged other Australian artists to capture the national life of Australia.

He is best known for his “national narratives,” among them Shearing the Rams, A break away! and Bailed Up.

“Shearing the Rams” by Tom Roberts was painted in 1890 and depicts the shearing of the sheep in a timber shearing shed.

At the same time, this was also a scene of excitement, and he has bathed the composition in the warm Australian sunlight.

The two young boys capture the joy of the occasion. One boy is on the left in bare feet, and the second is in the center of the composition, looking directly at the viewer with a white-toothed smile.

“A Break Away!” by Tom Roberts depicts a mob of thirsty sheep stampeding towards a dam for water. A drover on horseback is attempting to turn the mob before they crush and drown each other in their natural need to drink.

This painting, an icon of Australian art, is part of a series of works by Tom Roberts that captured the emerging spirit of national identity in Australia during the 1890s.

Roberts painted this work at Corowa, a town on the border between New South Wales and Victoria, Australia. The painting presents a time of drought, with little grass, and the soil is just dust.

The work itself is a reflection on the pioneering days of the pastoral industry, which were coming to an end by the early 1900s.

“Bailed Up” by Tom Roberts depicts a distinctive Australian subject of a stagecoach being held up by bushrangers in a forested section of an isolated road.

It was at this sheep station that he also painted “The Golden Fleece,” a famous painting depicting sheep shearing.

Still, it would have influenced Roberts and helped him conceived the idea of painting this subject. This painting presents the story of Captain Thunderbolt (Frederick Ward) holding up the Inverell–Glen Innes mail-coach.

Roberts is beautifully depicting a crackling dry landscape in the heat and light of a high summer’s day in the Australian bush.

It took 33 years for this iconic painting to find a buyer, and in 1927, Roberts reworked this painting to simplify the work making it more abstract.

“Miss Minna Simpson” by Tom Roberts depicts the five-year-old niece of Tom Roberts’s future wife. The rosy-cheeked face looks directly at the viewer as she firmly holds her cat.

There is a confident contrast between the child’s relaxed face and the cat’s scowling face and paws reaching for the bowl of milk.

Roberts’ tonal palette with the dark background sets off the white apron, bonnet, and lace pays homage to the much-admired international artists such as Manet, Whistler, and to Velásquez.

“The essence of all beautiful art, all great art, is gratitude.”
– Friedrich Nietzsche