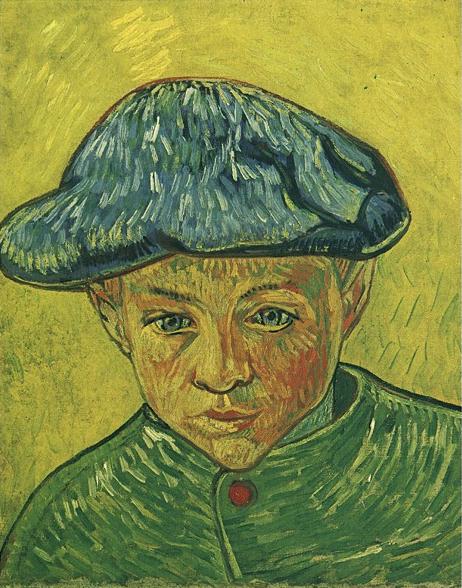 “Portrait of Camille Roulin” by Vincent van Gogh is a portrait of the youngest son of the postman Joseph Roulin, a friend of Van Gogh’s. When his portrait was painted, Camille was eleven years of age.

The Roulin Family all had their portraits painted by Vincent van Gogh in Arles between 1888 and 1889. The family consisted of Joseph, his wife Augustine, and their three children: Armand, Camille, and Marcelle.

Although Van Gogh loved to paint portraits, it was difficult for financial reasons for him to find models. So, finding an entire family that agreed to sit for multiple paintings was a bonus.

Joseph Roulin became a good and supportive friend to Van Gogh during his stay in Arles. Van Gogh truly admired Joseph and went to great lengths to capture his character.

With children ranging in age from four months to seventeen years, the family also allowed him to produce portraits from several different life stages. Van Gogh used colors and artistic themes to evoke the desired emotions from the viewer.

Camille Roulin was born in Lambesc in southern France in 1877 and died in 1922. Van Gogh made three portraits of Camille Roulin, aged 11.

Two head and shoulders portraits are very similar and can be seen exhibited at the Van Gogh Museum and Philadelphia Museum of Art. The third portrait shows a schoolboy with Uniform Cap and is Museu de Arte de Sao Paulo, Sao Paulo, Brazil.

Van Gogh wanted to paint ‘modern’ portraits that did justice to the sitter’s character. He wrote to his sister Willemien.

I seek it by way of color.”

Vincent always had a hard time finding models. He was grateful that the Roulin’s family agreed to sit for him. He painted more than twenty portraits of the family.

Van Gogh made two versions of his head and shoulders portrait of Camille. He sent this one to his brother Theo and gave the other one to the family.

The blue of the cap, the green and red of the coat, and the background’s yellow are all echoed in Camille’s face.

“The Schoolboy with Uniform Cap” by Vincent van Gogh

In the third portrait, titled “The Schoolboy with Uniform Cap,” Camille is staring off in space. His arm is over the back of a chair, mouth gaped open, possibly lost in thought. This was the larger of the three works made of Camille. 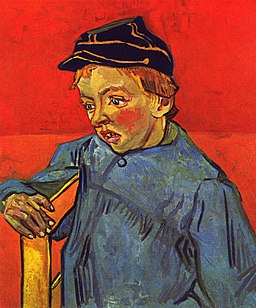 Van Gogh moved to Arles in southern France in 1888, where he produced some of his best work. The sunflower paintings, some of the most recognizable of Van Gogh’s paintings, were created at this time.

He worked conscientiously, developing his ideas for paintings. This was one of Van Gogh’s happier periods of life. He is confident and content.

In a letter to his brother, Theo, he wrote:

“Painting as it is now, promises to become more subtle – more like music and less like sculpture – and above all, it promises color.”

The Roulin Family series was made during one of Van Gogh’s most prolific periods. The work allowed him to consolidate his artistic education towards his goal of expressing something meaningful.

The Schoolboy with Uniform Cap