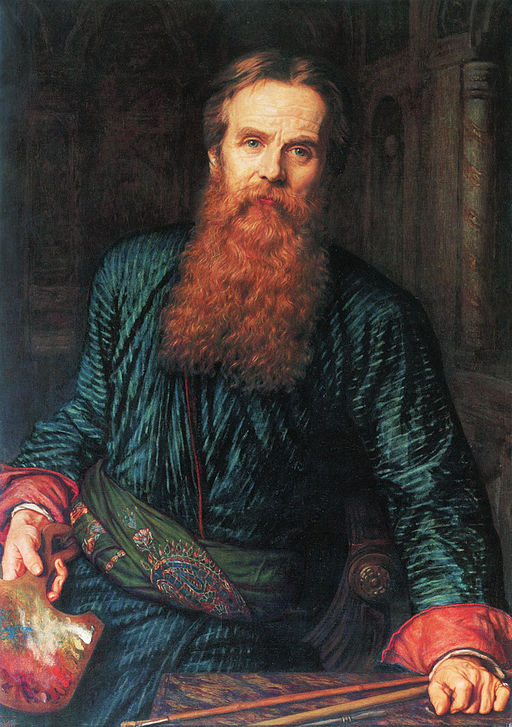 “The Finding of the Savior in the Temple” by William Holman Hunt was intended as a historically accurate depiction of the child Jesus debating the scriptures’ interpretation with learned rabbis.

The painting illustrates a passage from the Gospel of Luke and depicts how Mary and Joseph find Jesus in the temple.

Meanwhile, the rabbis in the temple react in various contrasting ways to his questions and responses, some intrigued, others angry or dismissive.

This depiction of the child Jesus debating with the rabbis who respond with different reactions is part of this subject’s tradition in art.

“Our English Coasts” by William Holman Hunt depicts a flock of sheep lining Sussex’s picturesque coast. The scenic location is on the cliffs at Fairlight Glen, beside Covehust Bay near Hastings, called the Lovers’ Seat.

Hunt worked en Plein air at the location depicted in late 1852, despite cold and rainy weather. Hunt has paid scrupulous attention to natural detail and painted in many layers, with brilliant colors.

This painting was exhibited at the Royal Academy under the title “Our English Coasts.” Still, the frame bore the inscription “The Lost Sheep,” and it was later renamed “Strayed Sheep” when exhibited at the Exposition Universelle in Paris in 1855.

Hunt’s works were not initially successful and were widely attacked in the art press. He achieved some early note for his intensely naturalistic scenes of modern rural and urban life; however, it was for his religious paintings that he became famous.

In the mid-1850s, Hunt traveled to the Holy Land in search of accurate topographical and ethnographical material for further religious works.

Hunt also painted many works based on poems. Hunt remained true to their ideals, the Pre-Raphaelite Brotherhood, throughout his career.

He eventually had to relinquish painting because failing eyesight meant that he could not achieve the quality he wanted.

Hunt died in 1910 and was buried in St Paul’s Cathedral in London, England.

Sheltering a Christian Missionary from the Persecution of the Druids

The desolate scene includes a skull to the left and a dead animal’s skeletal remains to the right. The painting symbolizes the “scapegoat” described in the Book of Leviticus.

The Awakening Conscience: The Story of a Pre-Raphaelite Muse

“The door of the human heart can only be opened from the inside.”
– William Holman Hunt