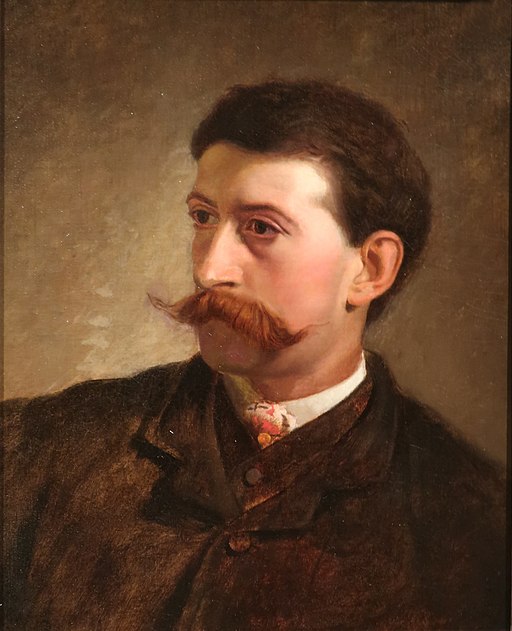 Winslow Homer (1836 – 1910) was an American landscape painter and printmaker, best known for his marine subjects. Homer was mostly self-taught and began his career working as a commercial illustrator.

He subsequently took up oil painting and also worked extensively in watercolor, creating a fluid and prolific oeuvre, primarily chronicling his working vacations.

Born in Boston, his mother was a gifted amateur watercolorist and Homer’s first teacher. She and her son had a close relationship throughout their lives.

Homer grew up mostly in then-rural Cambridge, Massachusetts, and his artistic talent was evident in his early years.

After Homer’s high school graduation, his father arranged for an apprenticeship to a Boston commercial lithographer.

It was a treadmill experience, and as soon as he could, he started a freelance career later stating, “I have had no master, and never shall have any.”

Homer’s career as an illustrator lasted nearly twenty years. He contributed illustrations of Boston life and rural New England life to a range of magazines at a time when the market for illustrations was growing rapidly.

His early works of urban and country social scenes were characterized by clean outlines, simplified forms, dramatic contrast of light and dark. His quick success was mostly due to this understanding of graphic design.

In 1859, he opened a studio in the Tenth Street Studio Building in New York City, the artistic and publishing capital of the United States. In only about a year of self-training, Homer was producing oil works.

During the American Civil War (1861–1865), Harper’s Weekly sent Homer to the front lines, where he sketched battle scenes and camp life.

Back at his studio, Homer set to work on a series of war-related paintings based on his sketches. These sold quickly, and he was elected an Associate Academician, then a full Academician in 1865.

During this time, he also continued to sell his illustrations to periodicals.

After the war, Homer turned his attention primarily to scenes of childhood and young women, reflecting nostalgia for simpler times, both his own and the nation as a whole. Homer also spent two years (1881–1882) in England.

His works from this period are almost exclusively watercolors. Homer found a new style and vision which carried his talent into new realms.

Back in the U.S. in 1882, Homer showed his English watercolors in New York, and critics noticed the change in style at once and gave high praise.

Continuing to work, Homer finally reached financial stability, by 1900, as his paintings sold to museums and his investments flourished. Homer took more trips to Canada and the Caribbean, which created more inspired works.

Homer died in 1910 at the age of 74 in his studio, where his final painting remained unfinished.

“Eight Bells” by Winslow Homer depicts two sailors determining their ship’s latitude. It is one of Homer’s best-known paintings that dramatically narrates humanity’s relationship to the ocean.

This painting was the culmination of a series of oil paintings that Homer made in Maine. Several years earlier, Homer painted a watercolor painting on his voyage to England that also showed a sailor performing this activity.

“Eight Bells” is a reference to the watch system, computed as one bell every 30 minutes. “Eight bells” can be either 8 o’clock, 12 o’clock, or 4 o’clock. Museum:  Addison Gallery of American Art

“The Gulf Stream” by Winslow Homer shows a lone man in a dismasted rudderless boat struggling against the waves of the sea.

The marine theme was of interest to Homer for more than a decade as he often vacationed in Florida, Cuba, and the Caribbean. Homer crossed the Gulf Stream many times, and his trips usually inspired several related works.

A visit to Nassau and Florida preceded this painting and being the year after the death of his father, and it may be revealing his sense of vulnerability. Museum: Metropolitan Museum of Art – M.E.T.

“The Fog Warning” by Winslow Homer depicts a lone fisherman in a dory who has caught several halibut but now sees fog approaching, threatening to cut him off as he rows back to his ship.

He looks over his shoulder as he faces his most challenging task of the day, the return to the main ship. The choppy seas and the high waves show that the journey home will demand all his physical efforts.

The scene is psychologically disturbing as the risk of being lost as a result of a sudden fog is very real. Museum: Museum of Fine Arts, Boston

Breezing Up (A Fair Wind)

“Breezing Up (A Fair Wind)” by Winslow Homer is an iconic painting of a father and three boys out for a spirited sail.

Homer had a sensibility which allowed him to distill art from potentially sentimental subjects and to yield straightforward views of American life of the period.

Homer painted warm and appealing images that appealed to the postwar nostalgia for a simpler, more innocent America.

Following a trip to Europe in 1866–1867, Homer adopted a warmer palette and a technique, which owed much to the influence of French artists such as Courbet, Manet, and Monet. National Gallery of Art, Washington, D.C.

“Summer Squall” by Winslow Homer depicts the foaming water violently surging over and around the flat rock in the foreground. During calm waters, this spot was one of the artist’s favorite fishing locations.

The sailboat in the distance dramatizes the human struggle with the forces of nature. This painting was inspired by a sudden storm Homer could see from his studio at Prouts Neck, Maine.

“The Life Line” by Winslow Homer depicts the dramatic rescue from a foundering ship made possible by a recent innovation, the breeches buoy.

Secured to ship and shore, the device permitted the transfer of stranded passengers to safety using a pulley. The painting’s frame is cropped down to its essentials.

The composition focuses on the lifesaving action surrounded by massive waves. The drenching of the semiconscious woman and her anonymous heroic savior.

Not shown in the composition are the two crew teams on either end, which hauled back and forth the pulley system. The return rope is shown slack in the ocean. Museum: Philadelphia Museum of Art

“Summer Night” by Winslow Homer depicts a nocturnal scene by the sea with a sense of poetry and mystery.

The light and shade effects blur shapes, while two women dance on the shore. Summer Night expresses this synthesis of Homers Paris experience and the early evolution of his signature style midway between Realism and Symbolism.

Winslow Homer: The Nature of the Artist

A Closer Look at Winslow Homer

“I prefer every time a picture composed and painted outdoors. The thing is done without your knowing it.”

“The sun will not rise or set without my notice, and thanks.”

“The life that I have chosen gives me my full hours of enjoyment.”

“You will see, in the future, I will live by my watercolors.”

“What they call talent is nothing but the capacity for doing continuous work in the right way.”

“In dark, cold solitude of winter months…I thank the Lord for this opportunity for reflection.”

“Look at nature, work independently, and solve your problems.”

“I will paint for money at any time.”

“When you paint, try to put down exactly what you see. Whatever else you have to offer will come out anyway.”