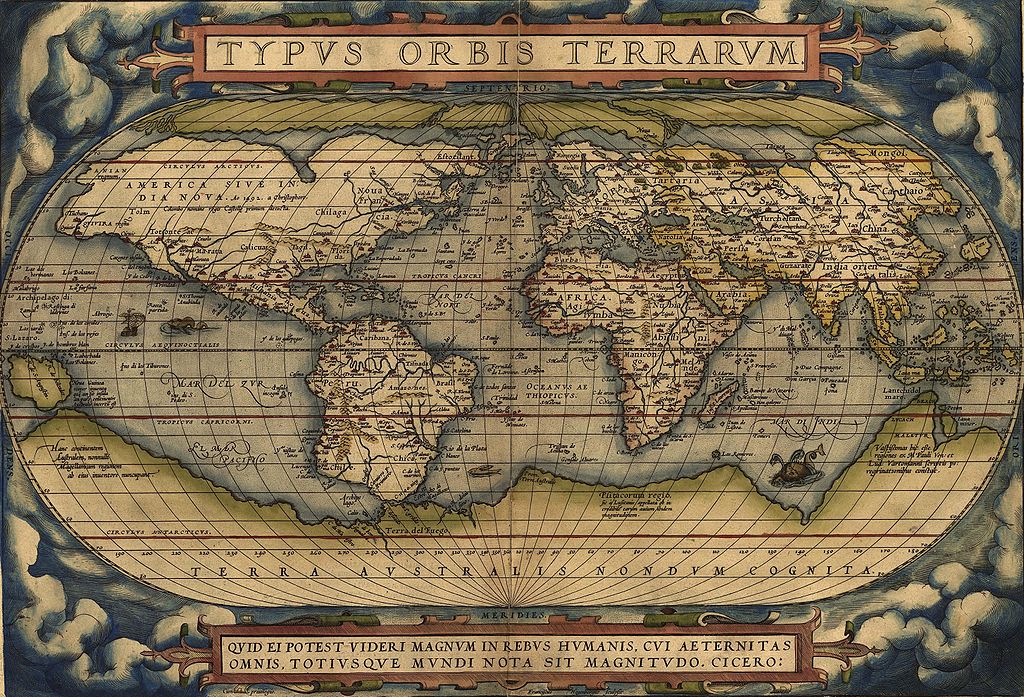 Theatre of the Orb of the World – First Atlas

Theatrum Orbis Terrarum, which is Latin for “Theatre of the Orb of the World,” is considered to be the first real modern atlas. Compiled by Abraham Ortelius in 1570 in Antwerp, it consisted of a collection of uniform maps and supporting text bound to form a single book.

Previously, groupings of maps were only created for individual one-off orders. In the Ortelius atlas, however, the maps were standardized, all similar in style and size arranged logically by continent, region, and state.

After the initial publication of Theatrum Orbis Terrarum, Ortelius regularly revised and expanded the atlas.

From its original 70 maps and 87 bibliographic references in the first edition in 1570, the atlas grew through its 31 editions to encompass 183 references and 167 charts in 1612. 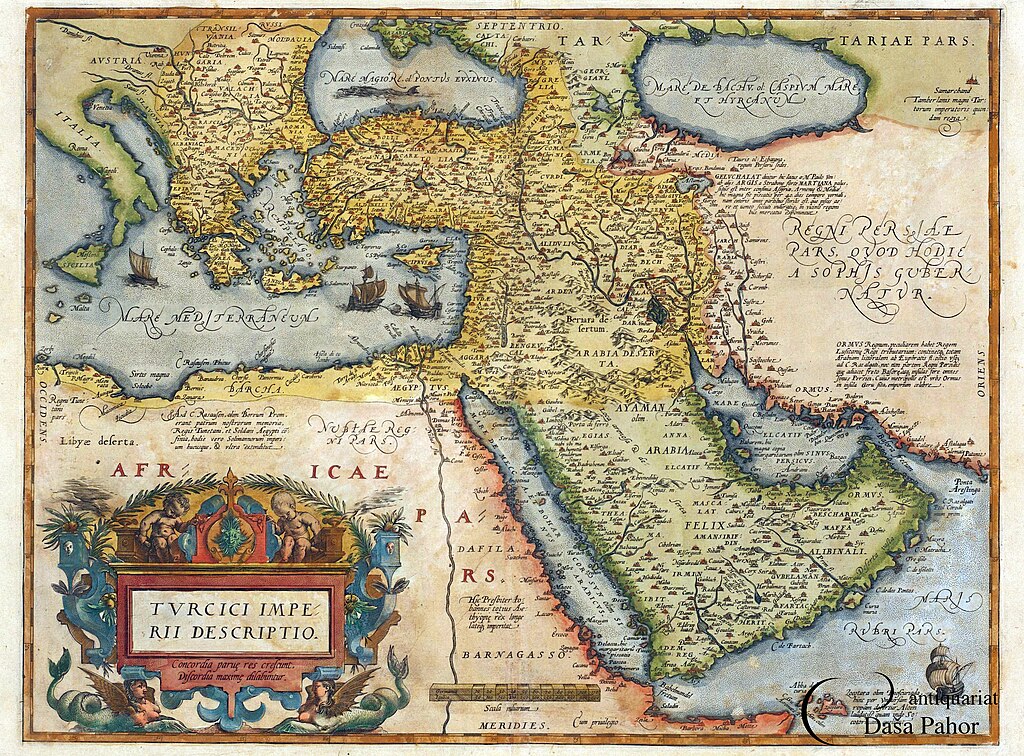 The title page had allegorical images with the five known continents presented by symbolic women, with Europe as the Queen.

The moneyed classes which had an interest in knowledge and science became significant consumers of the convenient size and comprehensive knowledge of Ortelius’s Atlas.

The commercial success of the atlas prompted the Ortelius Theatrum to expand and improve the atlas continually.

In addition to the initial Latin version, Dutch, German and French editions were later published. By the time of Ortelius’ death in 1598, there were twenty-five editions that had appeared in seven different languages.

The publication of this book of maps is considered as marking the official beginning of the Golden Age of Netherlandish cartography, which lasted for about one hundred years.

Originals of Ortelius’s maps are popular collectors’ items and often sell for tens of thousands of dollars. Facsimiles of his maps are also available from many specialized map retailers. 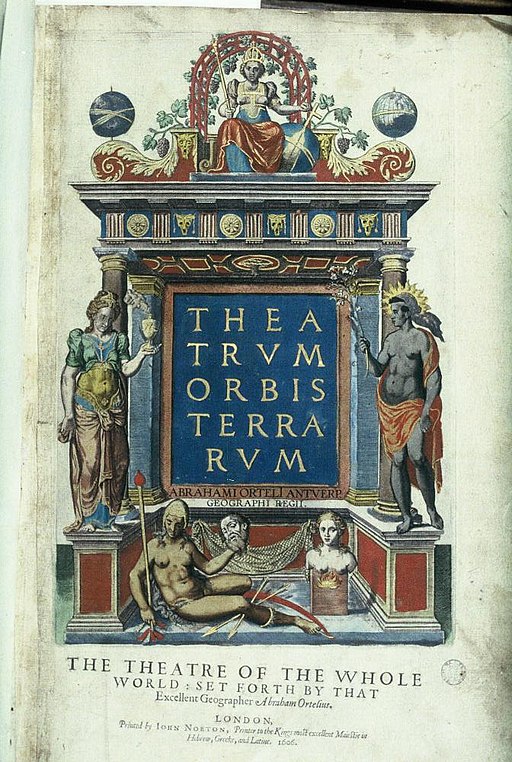 Title Page of 1606 edition, with female figures representing the continents

Maps were used as propaganda tools by the Dutch Companies to encourage the commodification of land and for their commercial agenda.

During the Age of Discovery, with their expertise in business, cartography, shipbuilding, seafaring, and navigation, the Dutch traveled to the far corners of the world.

In the 16th and 17th centuries, Dutch-speaking cartographers helped lay the foundations for the birth and development of modern cartography, including nautical cartography and stellar cartography.

The Dutch-speaking people came to dominate the map making and map printing industry by their travels, trade ventures, and widespread commercial networks.

As Dutch ships reached into the unknown corners of the globe, Dutch cartographers incorporated discoveries into their work and published it, so the maps multiplied freely and improved.

The Dutch were the first non-natives to discover, explore, and map many unknown isolated areas of the world such as Australia, New Zealand, Tonga, and Easter Island. 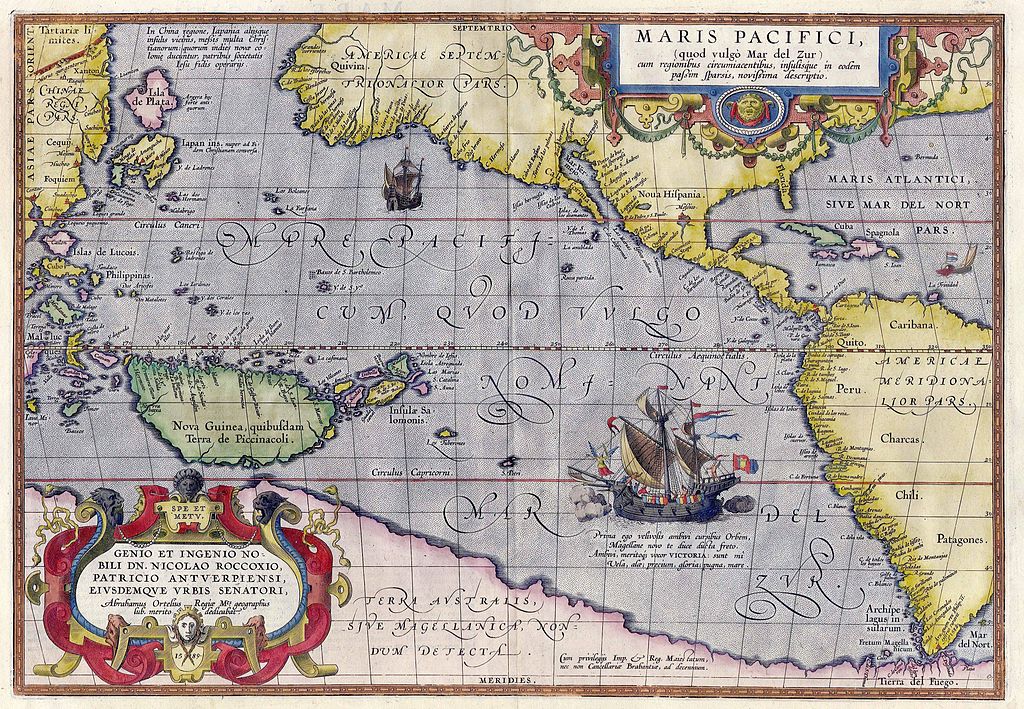 The first printed map of the Pacific, showing the Americas for the first time. Maris Pacifici by Abraham Ortelius, 1589

Abraham Ortelius (1527 – 1598) was a cartographer and geographer recognized as the creator of the first modern atlas, the Theatrum Orbis Terrarum (Theatre of the World).

Ortelius is often considered one of the founders of the Netherlandish school of cartography and one of the most notable figures of the school in its golden age (1570s–1670s).

He is also the first person to imagine that the continents were joined before drifting to their present positions.

How did the Dutch create a colonial empire?

When The Dutch Ruled The World: Rise and Fall of the Dutch East India Company

Why did the Dutch Empire Collapse?