The Gold Lunula is a distinctive type of early Bronze Age collar necklace shaped like a crescent moon. Lunulae are flat and thin, with roundish terminals that are twisted to 45 to 90 degrees from the main body of metal.

Gold lunulae were made sometime in the period between 2200–2000 BC and have mostly been found in Ireland. There are also smaller numbers in other parts of Europe in areas of the continent near the Atlantic coasts.

Of the more than a hundred gold lunulae that have been identified, more than eighty are from Ireland. They were all the work of a handful of expert goldsmiths, though the three distinct types are presumed to have had different creators.

Gold Lunula finds in graves are rare, suggesting they were regarded as a clan property rather than personal possessions. Some were found in bogs, perhaps suggesting ritual deposits, more were found on higher ground, under “standing stones.”

Most gold lunulae have decorative patterns very much resembling pottery patterns from about the same period. The decorations included geometrical patterns of straight lines, zig-zags, and criss-cross patterns.

The Lunulae were made by hammering a rod of gold flat, so it became sheet-like and fitted the desired shape. The decoration was then applied by impressing designs with a stylus.

The stylus used often leaves tell-tale impressions on the surface of the gold, allowing the identification of lunulae made with the same tool.

Several examples have a heavily crinkled appearance suggesting that they had been rolled up at multiple times, suggesting their use over many generations. 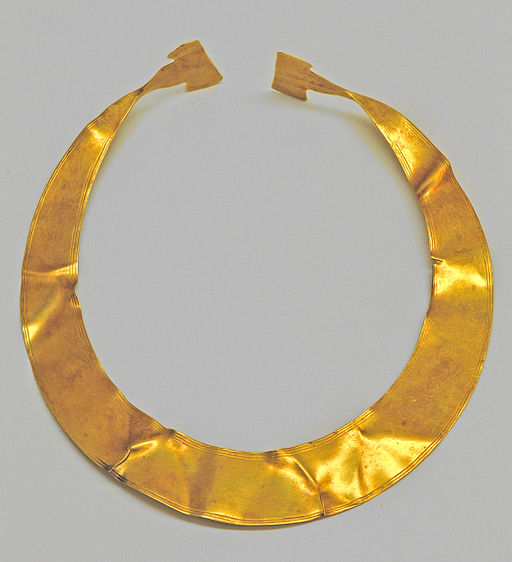 Archaeologists have classified gold lunulae into the following groups:

The “Classical” type is thin enough to be flexible when worn, and for the incised decoration to appear as relief on their underside.

Some of the “Classical Lunulae” have a variation in thickness across the piece, with the inner edge often three times thicker than the middle and the outer edge twice as thick.

Finds of “Classical Lunulae” are concentrated in the north of Ireland, probably near the sources of gold, with “Unaccomplished Lunulae” find spots are mostly from a “peripheral border” around this area.

A few “Classical Lunulae” have been found on the north Cornish coast and in southern Scotland, probably as a result of trade or migration. 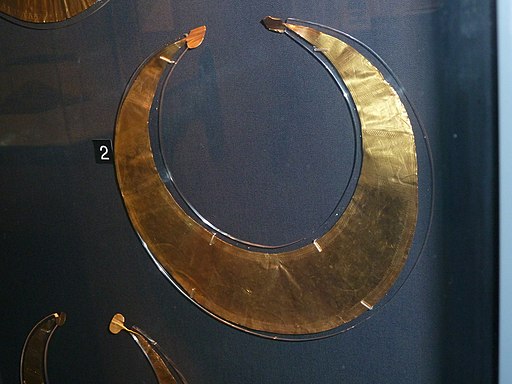 The “Provincial Lunulae,” of which only one example, has been found in Ireland are thicker and more rigid, they were probably all made outside Ireland. Their decoration can be more varied and are subdivided divided into two groups:

Lunulae were probably replaced as neck ornaments firstly by gold torcs, found from the Irish Middle Bronze Age. Later, still in the Late Bronze Age, Lunula evolved in gorges of thin ribbed gold, some with round discs at the side.

In Search Of Irish Gold