Achilles on Skyros by Nicolas Poussin

“Achilles on Skyros” in Art

Achilles on Skyros is an episode in the myth of Achilles, the Greek hero from the Trojan War. The core myth describes that rather than allow her son Achilles to die at Troy as prophesied, the nymph Thetis sent him to live at the court of Lycomedes, King of Skyros. Achilles was persuaded to disguise himself as a girl at the court of the King of Skyros. Thus he joined the daughters of the King as a lady-in-waiting to evade the prophecy. Achilles then fell in love with one of the princesses and had an affair with Deidamia, one of the daughters of King.

Meanwhile, Odysseus and several other Greek leaders were sent to Skyros to find Achilles because they needed his help in their battle in Troy. Odysseus knew the prophecy that the Trojan War could not be won without Achilles. To discover Achilles, Odysseus set a trap for Achilles by offering gifts, adornments and musical instruments as well as weapons, to the King’s daughters and friends. Odysseus then organized for his companions to imitate the noises of an enemy’s attack on the island with the blast of trumpets. Achilles was tricked into revealing himself by quickly picking a weapon to fight back.

Once Achilles was revealed, he joined Odysseus, and they departed for the Trojan War. In some versions of the story, Deidamia dressed as a man followed him. The story also describes how Achilles married before leaving for Troy,

The story of “Achilles on Skyros” became a popular topic in arts and literature from Classical times until the middle of the 20th century. The carnivalesque disguises and gender transpositions at the heart of the story were particularly popular in opera, with over 30 different operas on the theme between 1641 and 1857.

The “Achilles on Skyros” story does not exist in Homer’s epic poem Iliad. The episode was written down in detail in later versions of the story, particularly the Achilleid by the Roman poet Statius.

A Tour of “Achilles on Skyros” in Art

“Achilles on Skyros” by Nicolas Poussin

“Achilles on Skyros” by Nicolas Poussin depicts Odysseus ploy at the point when laid a trap in which they presented the young women with jewelry and other finery, as well as a sword, spear, and shield. Achilles, shown here dressed in women’s clothes, holding a mirror, however, he also instinctively grasped the sword, identifying himself as Achilles.

According to the legend, Thetis, the mother of Achilles, learned that her son was destined to die if he fought in the Trojan War. Her attempts to disguised him as a woman with the daughters of King Lycomedes on the island of Skyros were ultimately undermined by Odysseus trickery.

Nicolas Poussin (1594 – 1665) was the leading painter of the classical French Baroque style, although he spent most of his working life in Rome. Poussin’s depiction demonstrates his preference for psychological to physical drama. In this late work, the moment of revelation and recognition is presented through carefully structured, clearly legible poses. 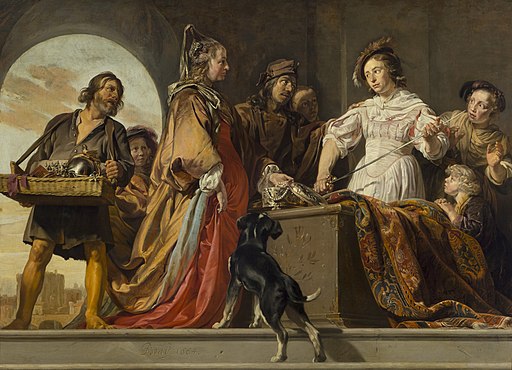 “The Discovery of Achilles among the Daughters of Lycomedes” by Jan de Bray depicts Odysseus standing in the archway as he carries a basket containing Achilles’s helmet. Achilles, disguised as a woman, stands behind a decorated chest draped with an elaborate Oriental carpet. Achilles clasps the hilt of the sword and rests the tip of the blade on his left hand. The other characters look on in astonishment at his action. The central woman offers him a string of pearls from the jewelry box in an attempt to cover up his exposure.

Odysseus and other Greeks had laid a cunning trap with gifts before the women of jewelry, clothes, and other finery, but among them a sword, spear, and shield. When a trumpet was sounded, Achilles instinctively snatched up the weapons and betrayed his identity. This composition, with prominent architecture and dramatically dressed figures, gives the picture the appearance of a classical theatre performance.

The artist Jan de Bray (1627 – 1697) was a Dutch Golden Age painter who lived and worked in Haarlem until the age of 60 when he went bankrupt and moved to Amsterdam.

The Discovery of Achilles among the Daughters of Lycomedes

“Discovery of Achilles on Skyros” by Nicolas Poussin depicts the Greek chieftains Ulysses and Diomedes disguised themselves as merchants. Achilles gave himself away by snatching up a sword that they had concealed in their chests of jewelry and clothing.

The popularity of the “Achilles on Skyros” story was due to the aspect of disguises and cross-dressing. Achilles dressed as a girl, and women often performed his role. Many of the earlier operas approached the theme from a carnivalesque point of view, emphasizing the comedy, the masquerade, and the homoerotic aspects. Other Operas focused on the failed struggle to conceal the masculinity of the archetypical hero Achilles, and how the inherent nature of the person is stronger than the nurture he pretends.

Some of the well-known composers writing an opera on this theme include Domenico Scarlatti, John Gay, and Georg Friedrich Händel. 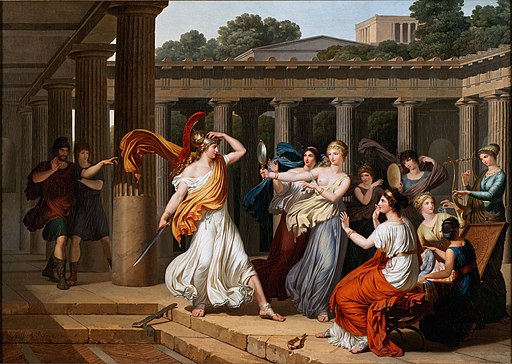 “Odysseus recognizes Achilles amongst the daughters of Lycomedes” by Louis Gauffier depicts Achilles disguised as a woman, hidden among King Lycomedes’ daughters in an attempt to avoid the prophecy of his death in the Trojan War. The cunning Odysseus had learned of his hiding place and had various gifts presented to the King’s daughters, including some weapons. Odysseus then had a battle trumpet played, knowing that Achilles would reach for the nearest weapon, which he did.

Louis Gauffier (1762–1801) was a French painter who spent most of his time in Italy. He could not receive patronage from France because he was branded a royalist, and this curtailed his career as a history painter. Instead, he painted landscapes, which he sold to English tourists.

In Greek mythology, Achilles (Latin version) or Achilleus (Greek version) was a hero of the Trojan War, the greatest of all the Greek warriors, and is the central character of Homer’s Iliad.

Achilles’ most notable feat during the Trojan War was the slaying of the Trojan prince Hector. Achilles was killed near the end of the Trojan War by Paris. He was shot in the heel, his only weakness with an arrow. Legends state that Achilles was invulnerable in all of his body except for his heel because, when his mother Thetis dipped him in the River Styx as an infant, she held him by one of his heels.

Alluding to Achilles’ legends, the term “Achilles’ heel” has come to mean a point of weakness. The Achilles tendon is also named after him due to his legends.

Today, the term Achilles’ heel refers to a weakness despite overall strength, which can lead to downfall. While the mythological origin refers to a physical vulnerability, the idiomatic reference can apply to other qualities that can lead to defeat.

Odysseus, also known by the Latin variant Ulysses, is a legendary Greek king of Ithaca and the hero of Homer’s epic poem the Odyssey. Odysseus also plays a crucial role in Homer’s Iliad. Odysseus is renowned for his intellectual brilliance, guile, and versatility. He was known by the epithet Odysseus the Cunning. He is most famous for his homecoming journey, which took him ten years after the decade-long Trojan War.

“Achilles on Skyros” in Art

A Tour of Popular Mythological Paintings

“And overpowered by memory both men gave way to grief. Priam wept freely for Hector, throbbing, crouching before Achilles’ feet as Achilles wept himself, now for his father, now for Patroclus once again and their sobbing rose and fell throughout the house.”
– Homer