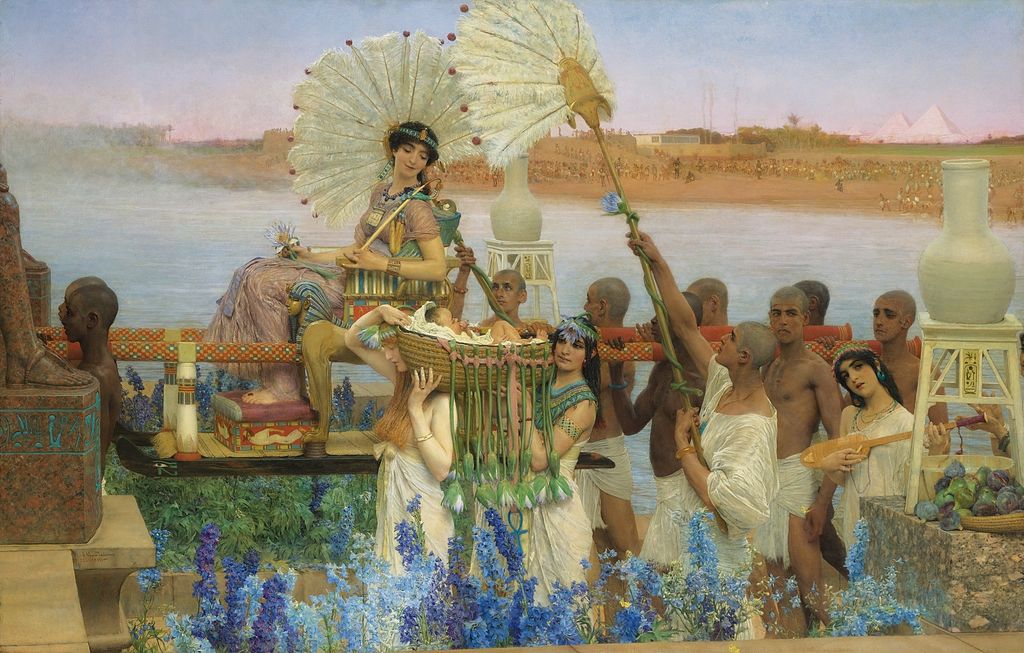 “The Finding of Moses” by Lawrence Alma-Tadema

Finding of Moses in Art

“The Finding of Moses” story has become a popular subject in art, especially from the Renaissance onwards. The earliest surviving depiction in art is a fresco in the Dura-Europos synagogue, datable to around 244 AD.

This earliest motif of a “naked princess” bathing in the river has been reused in much later art. A different tradition, beginning in the Renaissance, gave great more attention to the lavish Egyptian costumes.

Moses is a central figure in Jewish tradition and of significance in Christian thought. The subject also represented a case of a foundling or abandoned child, a significant social issue in modern times.

Paintings of the biblical story narrative have had many various titles such as “Moses in the Bullrushes,” and “Moses Saved from the Waters.”

A Tour of Finding of Moses Paintings

“The Finding of Moses” by Lawrence Alma-Tadema

The Finding of Moses by Lawrence Alma-Tadema was one of his last major works before his death in 1912. The painting represented the final phase of a revival in the 19th century by Orientalist artists.

These artists were keen to add authentic archaeological decor to their depictions. Lawrence Alma-Tadema’s art quickly fell out of favor, however after appreciation of Victorian painting was renewed, Alma-Tadema’s reputation was rediscovered as was this painting.

The work is a Biblical scene based on the Book of Exodus, in which the Pharaoh’s daughter comes to wash in the River Nile, and finds the infant Moses abandoned in a basket in the reeds.

The painting depicts the scene after the infant was discovered. It shows a procession on the way back to the Princess’s home in Memphis, the capital of the Old Kingdom of Egypt.

Male attendants in loincloths carry the Pharaoh’s daughter in an elaborately decorated chair. She wears a pink diaphanous gown and jewelry and holds a flail in her left hand, a symbol of royalty.

Her feet rest on a footstool decorated with bound captives, another symbol of royalty, which also references the enslaved Israelites.

The plinth and feet of a red granite statue are just visible to the front left. It is similar to a statue of Seti II in the British Museum.  Hieroglyphic cartouches identify her as the daughter of Ramesses II.

Attendants wave ostrich feather fans, while two female attendants carry Moses in his cradle alongside. The bassinet has been decorated with lotus flowers, tied on with a pink ribbon.

Another female attendant plays a stringed instrument. In the background, on the other bank of the river, teams of slaves can be seen laboring under their dark-skinned overseers.

Born in the Netherlands, and trained at the Royal Academy of Antwerp, he settled in England in 1870 and spent the rest of his life there.

A painter of classical-subjects, he became famous for his depictions of the decadence of the Roman Empire, with languorous figures set in fabulous marbled interiors or against a backdrop of the blue Mediterranean Sea and sky.

Though admired during his lifetime for his skills in the depictions of Classical antiquity, his work fell into disrepute after his death. O

nly since the 1960s has it been re-evaluated for its importance within nineteenth-century British art.

The Finding of Moses

“Moses saved from the Waters” by Orazio Gentileschi 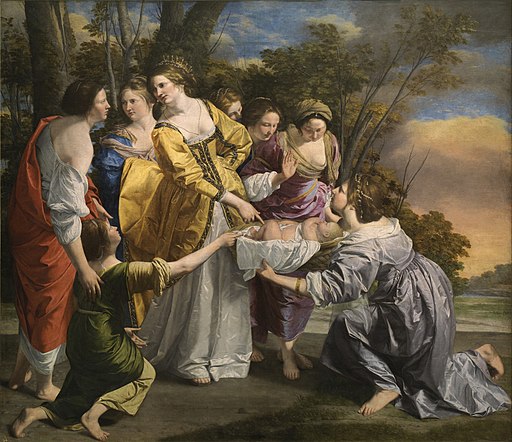 “Moses saved from the Waters” by Orazio Gentileschi depicts Moses Rescued from the Nile. Gentileschi painted this work in London at the age of seventy years old.  It was conceived for King Philip IV of Spain as a gift in 1633.

It is designed as a homage to Veronese’s festive scenes. All of the female figures are wearing silk, satin, and cotton clothing, accentuating the luxury of the garments and jewels.

The princess is wearing a golden-yellow dress; it’s edging embroidered with pearls and gems. Her head is adorned with a tiara painted in extraordinary detail.

The idealized landscape is dominated by orange dawn on the horizon. There is only a small glimpse of the Nile in the background.

The Biblical account of the story is described in the Book of Exodus, which recounts how, during the captivity in Egypt of the Israelite people, the Pharaoh ordered:

“Every Hebrew boy that is born, you must throw into the Nile, but let every girl live.”

When Moses’ mother had a male child, she hid him for three months. But when she could protect him no longer, she got a papyrus basket for him and coated it with tar and pitch.

Then she placed the child in it and put it among the reeds along the bank of the Nile. His sister, Miriam, stood at a distance to see what would happen to him.

Then Pharaoh’s daughter went down to the Nile to bathe, and her attendants were walking along the riverbank. She saw the basket among the reeds and sent her female slave to retrieve it.

She opened it and saw the baby. He was crying, and she felt sorry for him. “This is one of the Hebrew babies,” she said. Then his sister asked Pharaoh’s daughter, “Shall I go and get one of the Hebrew women to nurse the baby for you?”

“Yes, go,” she answered. So the girl went and got the baby’s mother. Pharaoh’s daughter said to her, “Take this baby and nurse him for me, and I will pay you.”

So the woman took the baby and nursed him. When the child grew older, she took him to Pharaoh’s daughter, and he became her son. She named him Moses, saying, “I drew him out of the water.”

“Moses saved from the Waters” by Nicolas Poussin

“Moses saved from the Waters” by Nicolas Poussin – Louvre Museum

“Moses saved from the Waters” by Nicolas Poussin depicts figures wearing the 17th-century idea of the ancient Egyptian dress, and the background includes pyramids and obelisks, where previously most artists had not attempted to represent a specifically Egyptian setting.

The 17th century saw the height of popularity for this biblical subject, with Poussin painting it at least three times.

The three versions by Poussin all include a Roman-style Nilus, the god, or personification of the Nile, reclining with a cornucopia.

This version shows the god next to a sphinx in the foreground. The sphinx was a copy of a specific classical statue in the Vatican.

The background includes a hippopotamus hunt on the river in the adapted from the Roman Nile mosaic.

“Moses saved from the Waters” by Bonifazio Veronese

“Moses saved from the Waters” by Bonifazio Veronese the first large and elaborate treatment of the subject to concentrate on a larger courtly group.

Bonifazio Veronese depicted contemporary costumes and composed as a large aristocratic picnic, complete with musicians, dwarves, dogs, and a monkey. The baby Moses is represented as an object of polite curiosity amongst all the strolling lovers.

Bonifacio Veronese (1487 –1553) was an Italian Renaissance painter who was active in the Venetian Republic.

His work had a significant influence on the younger generation of painters in Venice.

“The Finding of Moses” by Giovanni Battista Tiepolo

“The Finding of Moses” by Giovanni Battista Tiepolo is a dramatic and large painting. The Old Testament subject is sumptuously colored in contemporary dress and life-like details.

The original painting was originally even larger, but a section, showing a soldier and a dog in a river landscape, was removed from the right.

Giovanni Battista Tiepolo was an Italian painter from the Republic of Venice who painted not only in Italy but also in Germany and Spain.

Successful from the beginning of his career, he was a prolific, painter mainly in the Rococo style.

The Finding of Moses

Finding of Moses in Art

“I have been a stranger in a foreign land.”
– Moses