Wichita, the largest city in Kansas, is located in south-central Kansas on the Arkansas River. Wichita began as a trading post on the Chisholm Trail in the 1860s. The city grew as a destination for cattle drives traveling north from Texas to Kansas railroads.

In the 1920s entrepreneurs and aeronautical engineers established aircraft companies in Wichita, including Beechcraft, Cessna, and Stearman Aircraft. The city became an aircraft production hub known as “The Air Capital of the World.”

Today, many aeronautical firms continue to operate, design, and manufacture in Wichita and the city remains a major center of the American aircraft industry.

As an industrial hub, Wichita is a regional center of culture, media, and trade. The city hosts several universities and museums. The city’s Old Cowtown Museum maintains historical artifacts and exhibits on the city’s early history.

The Wichita Art Museum is the largest art museum in Kansas and contains over 7,000 works. The Ulrich Museum of Art at Wichita State University is an art museum with over 6,300 works. 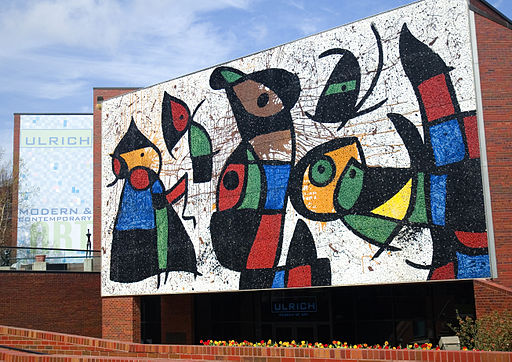 “The Keeper of the Plains” by Kiowa-Comanche artist Blackbear Bosin
– stands at the confluence of Arkansas and Little Arkansas rivers in Wichita, Kansas
near the Mid-America All-Indian Center