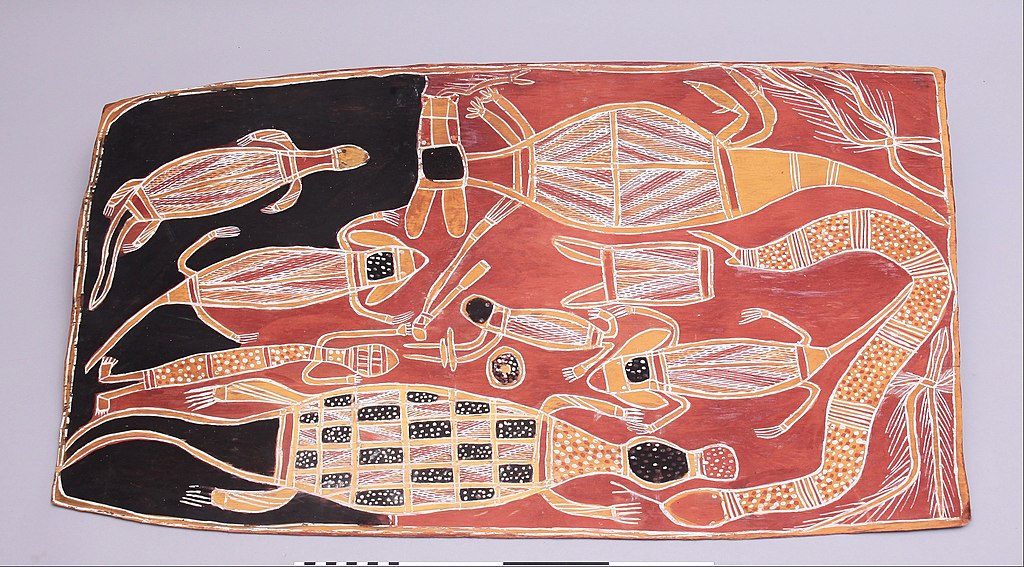 Australian Aboriginal Bark Paintings are painted on the interior of a strip of tree bark. Bark painting is a continuing form of artistic expression in Arnhem Land and other regions of Northern Australia.

Traditionally, bark paintings were produced for instructional and ceremonial purposes and were transient objects. Today, they are keenly sought after by Museums and Art Galleries.

The bark painting above was inspired by the myth of the origin of the fire. In the myth, the crocodile and lizard spirits decided to compete to be the first to provide fire.

The lizard got up in a tree to catch the fire from the sun, but the crocodile was first because it used a couple of fire drill sticks.

The lizard became angry and turned into a man so that he could take revenge on the crocodile ancestors. These fire sticks are received by a seated man, as shown in the center of the bark painting.

Humanity then used a spear and spear thrower to kill the kangaroo, which was a crocodile’s relative. The myth ends with the crocodile and his relatives pursuing the lizard and killing it.

The designs seen on authentic bark paintings are traditional designs that are owned by the artist or his clan, and cannot be painted by other artists.

These designs would traditionally be used to paint the body for ceremonies or rituals and also to decorate logs used in burials ceremonies.

While the designs themselves are ancient, the medium of painting them on a piece of flattened bark is a relatively modern phenomenon.

There is some evidence that in earlier times, artists would paint designs on the bark walls and roofs of their shelters. 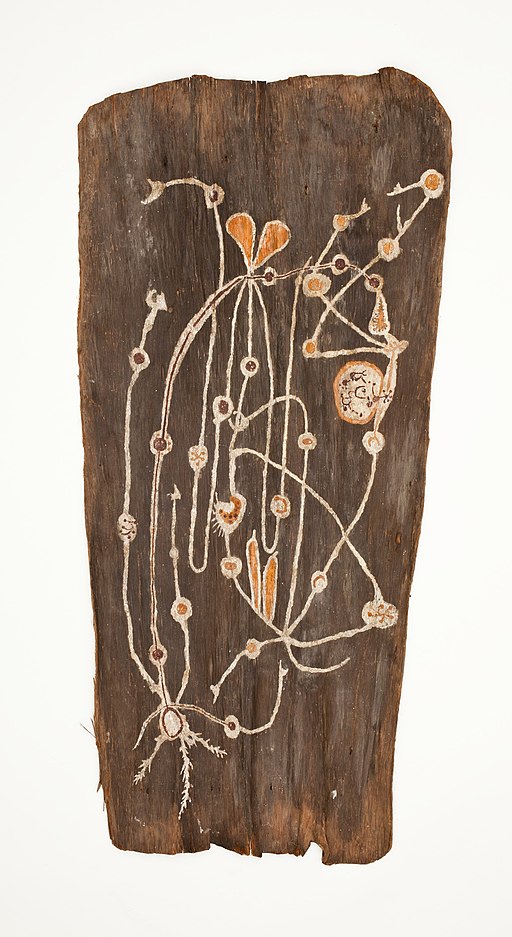 The earliest surviving bark paintings date from the nineteenth century. The modern form of bark paintings first appeared in the 1930s, when missionaries at Yirrkala and Milingimbi asked the local Yolngu people to produce bark paintings that could be sold in the major cities of Australia.

The missionaries were interested in earning funds that would help pay for the mission, and also to educate white Australians about Aboriginal culture.

As the trade grew, and the demand for paintings increased, leading artists started being asked to mount exhibitions.

It was not until the 1980s that bark paintings started being regarded as fine art, as opposed to Indigenous handicrafts.

Today fine bark paintings are valued on the skill and fame of the artist and the quality of the art. The degree to which the artwork encapsulates the culture by telling a traditional story can command high prices in the art market.

The Bark painting symbolizes the transformed body of a totem creature, associated with a disease of the trachea. The myth tells the story of the disease, and the lines that cross each other symbolize the cough that characterizes the creature’s disease.

Bark paintings are based on sacred designs that include abstract patterns and designs. The cross-hatching and color schemes can identify a clan. The pictures also often contain elements of the Eternal Dreamtime.

Sometimes the elements of a story are obvious, but sometimes the details are symbolic. The wavy lines punctuated by dots may be telling a complex Dreaming story that describes the journey of a creator spirit and events that happened along the way.

An initiated person who paints a story, which has restricted knowledge that can not be shared with uninitiated people will only provide an incomplete version of the story to an outsider. 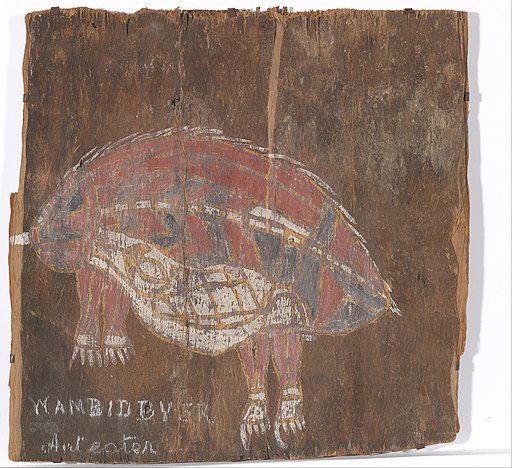 “Wambidbyer Anteater” was made by an anonymous artist belonging to one of the Kunwinjku or neighboring clans in Western Arnhem Land.

Depicted on a roughly chopped segment of thick bark, the image of the anteater is almost life-size. Red and yellow ochres and white clay outline and accentuate its internal organs.

This depiction is typical of the X-ray style of drawing found in the rock art of Western Arnhem Land, with the backbone, heart, lungs, and intestines showing. The image is anatomically correct, including the toenails.

“Wambidbyer Anteater” was initially acquired by the anthropologist Sir Walter Baldwin Spencer. From 1912 Spencer collected bark paintings from Arnhem Land for the Museum of Victoria.

The neatly written inscription on the bark, with the animal’s Aboriginal and English names, is a link to Spencer, the first collector.

This bark painting is the earliest in the National Gallery of Australia collection. It is a rare painting that has remained in relatively good condition despite its age.

The spiritual relationships between Aboriginal Australians and Torres Strait Islanders and the natural world are often described as totems or Dream Figures. These figures are usually an animal or other natural figure that spiritually represents a group of related people, such as a clan.

In some cases, such as the Yuin of coastal New South Wales, a person may have multiple totems of different types representing personal, clan, gender, and ceremonial.

Paperbark tree belonging to the genus Melaleuca, in the myrtle family and is characterized by their whitish papery bark.

The tree grows as a spreading tree up to 20 m (70 ft) tall, with its trunk covered by a white, beige, and grey thick papery bark.

Paperbark Tree has multiple uses and is widely used traditionally by indigenous Australians. A brew was made from the bruised young aromatic leaves to treat colds, headaches, and general sickness.

Yirrkala is a small community in East Arnhem Shire, Australia comprising predominantly Aboriginal Australians of the Yolngu people with a population of about 800 people.

There has been an Indigenous community at Yirrkala throughout recorded history. The population increased in size when the Yirrkala mission was founded in 1935.

Yirrkala is home to several leading Indigenous artists, whose traditional Aboriginal art, particularly bark painting, can be found in art galleries around the world.

Pioneer Bark Painters came from this region, and the National Museum of Australia considers the old masters include Mithinari Gurruwiwi, Birrikitji Gumana, and Mawalan Marika (see video below).

It is also a traditional home of the Didgeridoo, and some of the finest didgeridoos are still made at Yirrkala.

Narritjin Maymuru, who died in 1981, was a Yolngu people artist noted for Bark painting. He began painting in the 1940s, and after decades of work in 1979 he, and his son, became visiting artists at the Australian National University (see video below).

His daughter Galuma Maymuru has become recognized as a significant Australian artist.

Milingimbi Island is the largest island of the Crocodile Islands group off the coast of Arnhem Land, Northern Territory, Australia.

Aboriginal people have occupied this area for more than 40,000 years. It was an important ritual center for the great ceremonies conducted by indigenous peoples of this area.

A settlement was established on the island in 1923 by the Methodist Overseas Mission.

English is a second, third, or fourth language for most Aboriginal residents of Milingimbi. The Island has a long tradition in Aboriginal Bark Paintings.

The Kangaroo on this Australian $1 Bill shows the x-ray painting style used on Aboriginal Bark Paintings.