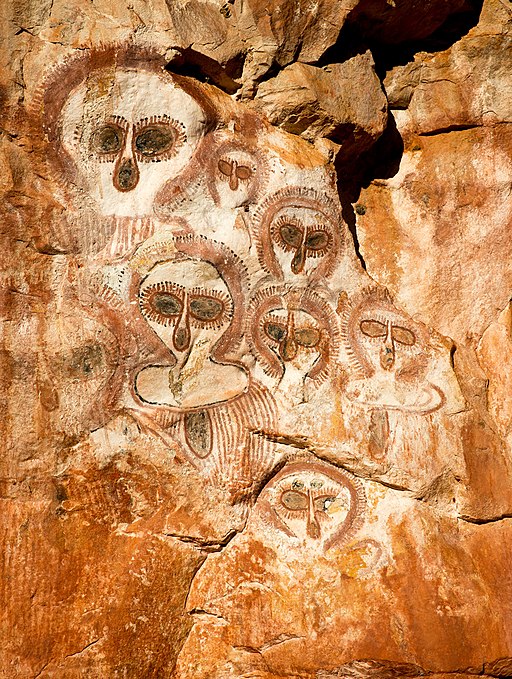 The Wandjina are cloud and rain spirits from Australian Aboriginal mythology that are depicted in rock art in Australia. The broad-stroke artwork dates to around 4,000 years ago.

The Wandjina paintings are characterized by common colors of black, red, and yellow on a white background. The spirits are depicted individually or in groups, vertically or horizontally, depending on the dimensions of the rock.

The large upper bodies and heads may show eyes and nose, but typically no mouth. They have no mouth because they are powerful and do not require speech, and if they had mouths, the rain would never cease.

The emergence of this art style follows the end of a millennium-long drought that gave way to a wetter climate characterized by regular monsoons.

Around the heads of Wandjina are lines or blocks of color, depicting lighting coming out of transparent helmets. The spirits are sometimes illustrated with other figures and objects like the Rainbow Serpent or yams.

Today, the paintings are still believed to possess powers and therefore are to be approached and treated respectfully. Each site and its art has a name.

The indigenous people of the Mowanjum Community repaint the images to ensure the continuity of the Wandjina’s presence. Refreshing the paintings is a method of regenerating life force. Annual repainting in December or January also ensures the arrival of the monsoon rains, according to local beliefs.

Repainting has occurred so often that at one site, the paint is over 40 layers deep. The painting style has evolved during this process: more recent figures are stockier, and some now possess eyelashes. 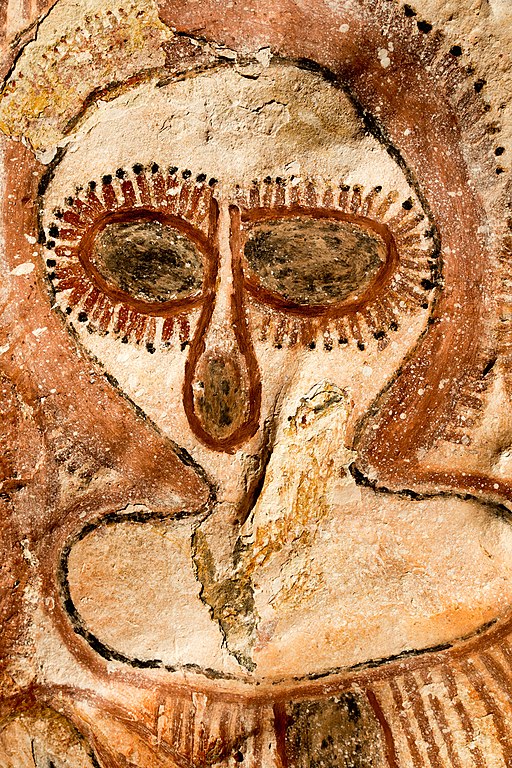 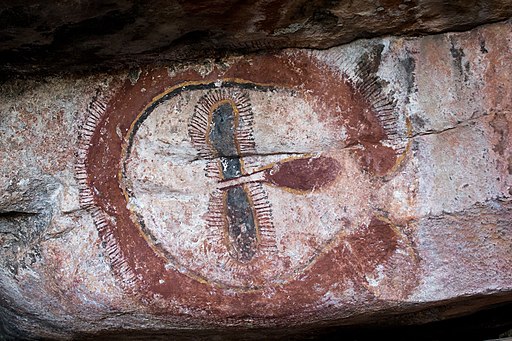 Begining in the 1960’s several Mowanjum artists depicted traditional Wandjina on pieces of string bark. These artworks were sold mainly through the mission at Kalumbaru.

These artworks are now exhibited in significant museum collections around the world.

Bark painting is an Australian Aboriginal art form, involving painting on the interior of a strip of tree bark.

This practice is a form of artistic expression in Arnhem Land and other regions in the Top End of Australia.

Traditionally, bark paintings were produced for instructional and ceremonial purposes and were transient objects.

Today, they are keenly sought after by museums and public art institutions.

The myth of Aboriginal Stories being Myths